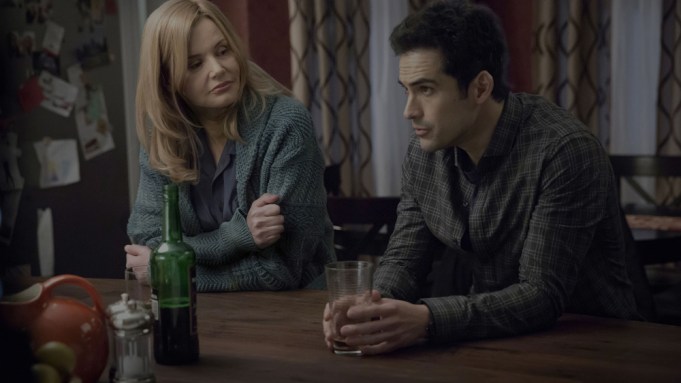 “The Exorcist” is ba-ack. On Friday, Comic-Con fans got the first look at Fox’s TV adaptation of the 1973 horror film, which premieres in the fall.

Inspired by William Blatty’s original book, the one-hour drama is set in Chicago and takes place 40 years after the Georgetown exorcism.

“There is no bigger fan of the original than myself, so if anyone’s gonna screw it up that’ll be me,” Slater laughed.

Before the pilot screened, the “Exorcist” cast, along with Slater, told funny stories about the frightening impact it had on them personally and professionally, with Davis admitting that the original film “scarred me for life.”

“I saw the movie as a kid in my basement and heard scratching on the window,” Slater recalled. “It was (only) a possum — the movie gets inside your head makes you feel like you did something wrong.”

When asked if this was the scariest role she’s researched, Hannah Kasulka, who plays the show’s possessed teen, said, “I grew up hearing about it, learning in church plays… I always played the angel, but always wanted to play the devil.”

Daniels, who stars as Father Marcus Lang, said he was initially skeptical when he first heard about Fox’s plans to remake the iconic film. “You can’t remake that movie,” he said. “It would be awful.”

It wasn’t until he read the script that he felt safer, at least for the time being.

“After researching with a priest… I got even more freaked out,” he admitted.

“The Exorcist” premieres Sept. 23 on Fox.