Ellen Page Talks LGBT Progress in Hollywood: ‘Being in the Closet Hurt My Career Way More Than Being Out’ 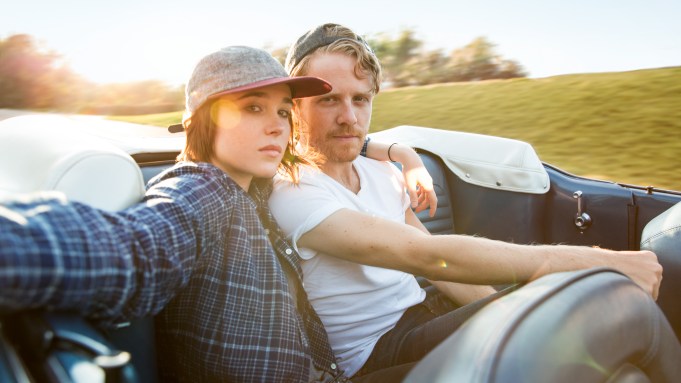 In Viceland’s new docu-series “Gaycation,” actress Ellen Page and best friend Ian Daniel travel around the world to explore LGBTQ cultures in other countries, but the Oscar-nominated thesp also turned her attention toward America in the show’s first season, even confronting Republican presidential candidate Ted Cruz about LGBT rights at a rally.

During an honest and often emotional keynote session with Daniel at SXSW on Saturday, Page shared her experiences of being an out lesbian in the entertainment industry, and addressed the lack of representation for minorities in film and TV.

When asked whether Hollywood has made any progress in its treatment of LGBT actors, or whether she’s found herself being passed over for jobs since coming out, Page admitted, “It’s hard for me to know — I’m not in rooms where people are making decisions of who to send what to, and the truth is, I’m absolutely not focusing on it, because being in the closet hurt my career way more than being out and being happy and feeling inspired again; being able to fuse my authentic self with my creative interests.”

Since coming out in 2014, Page noted that she’s been able to make projects like “Gaycation” and the film “Freeheld,” which she produced and starred in. She’s also producing a film with Kate Mara and Christine Vachon, in which she and Mara will star as lovers, but noted that that the conversation around such roles still seems to be fixated on her sexuality. “The differences I see are these little things like, ‘oh, you’re doing this thing that’s gay and this thing that’s gay, so now you’re doing these [gay roles].’ I’m like, you would never bring that up with a straight person; you would not say, ‘oh, you’re doing another movie where you’re playing a straight person, are you a little worried about it?’ No judgment, I’m just saying these are the double standards, and this is the conversation that needs to change.”

During the panel, Page admitted that her own quest for self-acceptance was a motivating factor in creating “Gaycation” with Daniel, whom she’s known for eight years.

“It really was about wanting more representation, because I knew how much it meant to me at 14 in Halifax, Nova Scotia, to be stumbling through the TV and find ‘But I’m a Cheerleader’ and Natasha Lyonne’s like ‘I don’t get it’ about French kissing a guy and I’m like ‘neither do I!’ And that meant something to me,” she recalled. “There can be such loneliness and isolation when you’re growing up in a society that does infuse this idea in you that you’re different or something’s wrong or you’re sinful or what have you … I’m a privileged person; I live in Los Angeles; I’ve done a job that has given me money; and I can walk down the street and kiss my girlfriend. I think a lot about those that are more vulnerable than me around the world and in the United States… here’s an opportunity to go make something that allows voices to be heard that you don’t ever get to hear.”

In the series, Page and Daniel journeyed to Japan, Jamaica, Brazil and across America, interviewing people who span the spectrum of LGBTQ experiences, and those who oppose them, including an ex-cop turned hitman who blithely admitted to killing gay people.

“I think we’d be lying if we said we didn’t feel frightened,” Page said of facing the man, who wore a mask to obscure his identity from the cameras. “It’s about capturing that person — you’re not quite putting a face to it ’cause he’s wearing a mask — really saying, ‘hey, this exists.’ You’re not thinking about yourself, you’re thinking about the vulnerable people who are walking the streets of Rio and might not know this man is walking right by them or he might just run them over in his car.”

Page and Daniel discussed the need for greater representation for all minorities, on camera and behind the scenes. “If I was still closeted I wouldn’t be making this show, and let’s think about how much that limits people, or limits people of all minorities who are not given opportunities to create work,” Page said. “We do a job that’s about telling stories — obviously it’s becoming clear that we can’t just be telling stories about one group of people. People need to have opportunity; that’s what’s going to make the whole industry grow and blossom. As a person who’s involved with it and as a person who’s an audience member, I really hope that starts to happen.”

Given her clash with Cruz, Page expressed hope during the keynote session that “Gaycation” can break through partisan lines to promote deeper discussions about the issues facing all minorities in America today. “When we’re hearing a lot of the political rhetoric we’re hearing right now, hopefully the show can say ‘hey, that’s not a little soundbite.’ If we’re in any way perpetuating a society that discriminates and treats people unfairly and doesn’t strive toward true equality, you cause a lot of harm in people’s lives, and a lot of pain and a lot of difficulty,” she said. “I hope the show maybe can help connect people to that, whether it’s members of the community or straight allies, or people who aren’t allies. I’ve learned so much making this show and feel so humbled by how much I’ve learned and the people I’ve met, so I hope that’s something we can maybe offer.”

Daniel agreed that the response to the show, which premiered on March 2, has already been powerful and deeply personal. “What I take from that is there was a need for these stories, and we’re fulfilling that on some level,” he said. “There’s a lack of diversity in storytelling, especially on television… and it’s not just about LGBT people, it’s people of color, it’s all minorities… we just need to be aware of what people are experiencing. If you’re not experiencing that and you’re a producer or filmmaker, just take the time to educate yourself a little bit, or to put yourself in someone else’s shoes, and I think that just makes for better content everywhere. For our show, we just want people to have some sort of visceral reaction. Hopefully they like it, but it’s cool if people don’t and we can create a dialogue and have a real conversation.”

“Gaycation” airs Wednesdays at 10 p.m. on Viceland. Watch the first episode below.