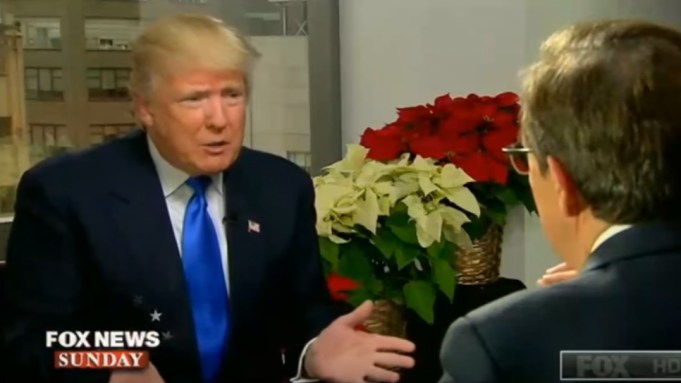 President-elect Donald Trump thinks allegations that Russia intervened to help him win the election are “ridiculous,” he told Chris Wallace in an interview on “Fox News Sunday.”

He also doubted that the CIA, which concluded that there was evidence that Russia took action during the campaign to harm Clinton’s candidacy, could even find the hackers.

“Hacking is very interesting, he said. “Once they hack, if you don’t catch them in the act, you’re not going to catch them. They have no idea if it’s Russia, or China, or somebody. It could be somebody sitting in a bed someplace.”

When asked by Wallace why the CIA would put out the story, Trump went on to accuse the Democrats of pushing the reports.

“I think the Democrats are putting it out because they suffered one of the greatest defeats in the history of politics in this country,” he continued. “It’s ridiculous. We’ve got to get back to making America great again.”

Wallace also pressed Trump on the fact that he’s been skipping intelligence briefings. Trump replied that “I get it when I need it,” and noted that Vice President-elect Mike Pence was attending the meetings.

“I don’t have to be told the same thing in the same words every single day for the next eight years,” he said.