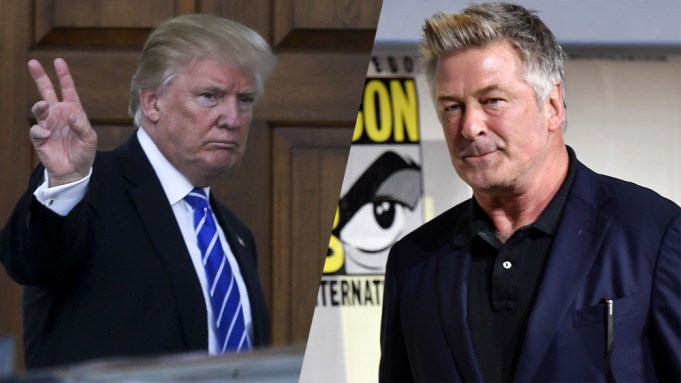 “I watched parts of @nbcsnl Saturday Night Live last night. It is a totally one-sided, biased show – nothing funny at all. Equal time for us?” Trump wrote in an early Sunday tweet, just hours after this week’s show, which had Alec Baldwin reviving his Trump impression in a sketch that painted the president-elect as completely unprepared for the Oval Office.

Baldwin replied in a series of tweets on Sunday morning, writing, “Equal time? Election is over. There is no more equal time. Now u try 2 b Pres + ppl respond. That’s pretty much it.”

“You know what I would do if I were Prez?” he continued. “I’d be focused on how to improve the lives of AS MANY AMERICANS AS POSSIBLE … I’d be focused on improving our reputation abroad, including actually fighting for freedom and not just oil.”

“I would make appointments that encouraged people, not generate fear and doubt,” Baldwin concluded. “I could go on. You want more advice, call me. I’ll be at SNL.”

It’s far from the first time Trump has taken aim at “SNL.” He has also slammed Baldwin in particular, whose impression of him gained popularity in the run-up to the Nov. 8 election.

Baldwin has publicly spoken against Trump before, and supported Hillary Clinton ahead of the election. The Twitter feud comes just one day after Trump demanded on the social media platform that the cast of “Hamilton” apologize to Vice President-elect Mike Pence for one of the cast’s actors giving him a speech at Friday night’s show.

…@realDonaldTrump
Equal time?
Election is over. There is no more equal time. Now u try 2 b Pres + ppl respond. That's pretty much it.