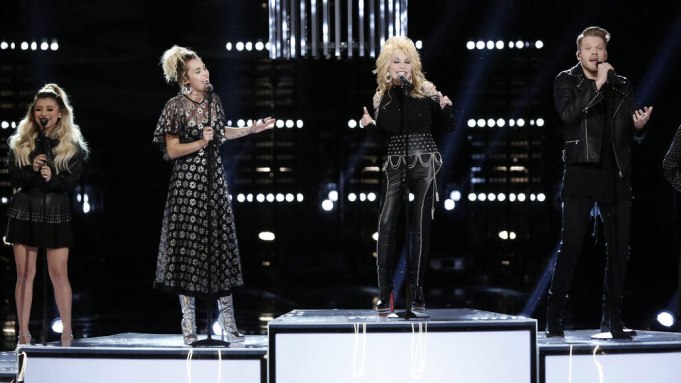 Clad in black and silver, Parton took center stage as she stood next to goddaughter Cyrus on the arced stage. Both have previously performed the song together, most notably at the 25th anniversary of Dollywood in 2010.

Pentatonix released a recording of the song in September, with Parton herself featured on the record. The band also performed the song with singer-songwriter Jennifer Nettles at the 2016 Country Music Awards earlier this month, as a tribute to the famed singer.

Earlier in the episode, Parton also joined Nettles and “The Voice” Top 10 contestants to sing “Circle of Love”, which is featured on Nettles new holiday album “To Celebrate Christmas.” Their performance came just a day before the NBC holiday special, “Christmas of Many Colors,” starring both Parton and Nettles. “Christmas of Many Colors” premieres Wednesday, Nov. 30 at 9 p.m.

Watch their rendition of “Circle of Love” below or click here.