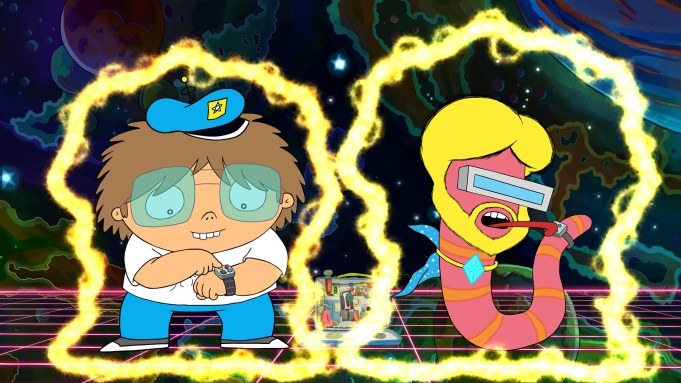 Ryan Quincy, creator of Disney XD’s new animated series “Future-Worm!,” isn’t afraid to poke fun at himself in a featurette released exclusively to Variety ahead of the show’s Aug. 1 debut.

It’s in line with the wacky nature of “Future-Worm!,” which follows the adventures of a 12-year-old inventor who creates a time-machine lunch box and teams up with a buff worm (with titanium-enforced abs, no less) from the future to travel through time and space.

The series is based on the popular short-form series that appeared on Disney XD and Disney XD’s YouTube channel last year.

Each episode includes three segments — one 11 minutes long, one seven minutes long and one three minutes long — that will be distributed across all Disney XD platforms, and the three-minute segments will usually premiere ahead of the current episode on Disney XD’s YouTube channel each week.

Quincy, a veteran of “South Park” for which he won two Emmys, voices Danny’s father, and Melanie Lynskey (“Two and a Half Men”) plays Danny’s mom.