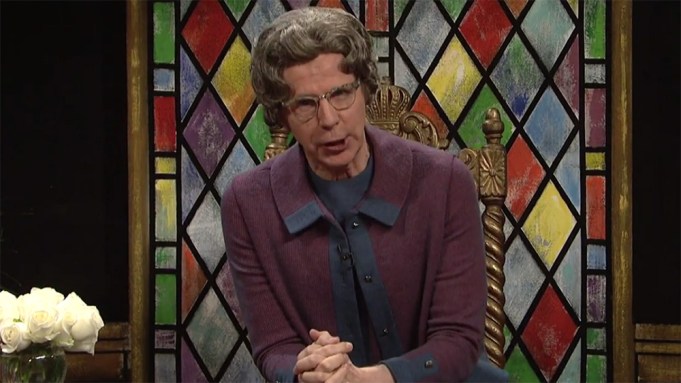 “Saturday Night Live” alum Dana Carvey brought back one of his most memorable characters Enid Strict, a.k.a. the Church Lady, this weekend to give her holy take on pop culture and, most importantly, interview some big names in politics.

Church Lady touched on the Met Gala first, taking aim at Madonna’s ensemble, which left her “fanny hanging out,” she noted. She made some jokes about Beyonce’s “Lemonade” before hawking her own brand of lemonade, which is “freshly squeezed just like Jay Z’s naughty parts.” (“Too soon?”)

But after that, she welcomed the Devil himself, better known as Ted Cruz, who dropped out of the GOP presidential race this week.

“Was it God’s plan for you to be humiliated by an orange mannequin? That’s sort of an odd plan for God to have for you,” Church Lady asked “Lucifer in the flesh” Cruz, played again by Taran Killam. Cruz then vowed to embrace his dark side — a joke that comes back at the end of the sketch.

The main event, though, was next: Church Lady’s interview with “the tangerine tornado” Donald Trump, along with his wife, daughter and, of course, another model. Trump and Church Lady discusses some of Trump’s favorite Bible passages, including “2 Genesis 2 Furious.” As it turns out, Church Lady is actually a fan of Trump.

“Donnie, there are those who say you’re not qualified, and that’s not true. I remember a ‘Celebrity Apprentice’ episode where Gary Busey didn’t sell enough pancakes and you just said ‘You’re fired,'” she told him. “And I just thought right then and there, ‘Give this man the nuclear codes.'”