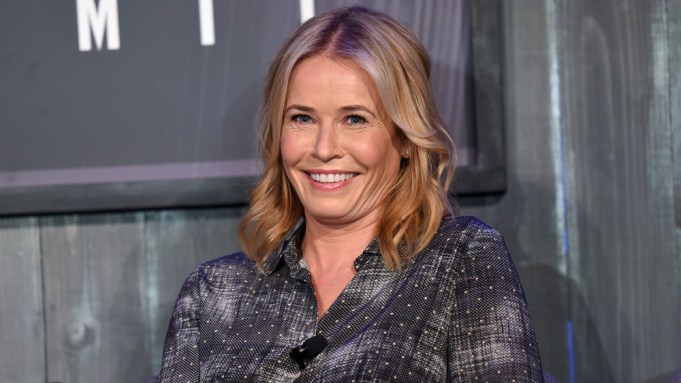 For years, Chelsea Handler dreaded getting feedback on her nightly talk show from network executives at E! But after she launched her “Chelsea” series on Netflix, she found herself begging chief content officer Ted Sarandos for reaction and thoughts about her approach to the series that she designed to “break the mold” of traditional TV talk shows.

Handler told the crowd Wednesday during her keynote address at Variety‘s Entertainment and Technology Summit that she wound up laughing over her instinctive neediness in the early days after the show’s May 11 bow.

“Why do I have to be co-dependent?” she said. “I never wanted any feedback before. Now that I don’t get it, it’s like ‘Where’s my boyfriend,’ ” Handler joked during the wide-ranging interview with Variety co-editor-in-chief Andrew Wallenstein.

During the session, Handler weighed in on everything from Donald Trump (“What are we going to do when he’s gone?”) to sexism in the industry (“Women deal with a bunch of bulls–t that they shouldn’t have to deal with”) to the Roger Ailes sexual harassment scandal to her evolution as a woman and TV personality.

The unconventional format of “Chelsea” allows Handler to pursue her interests and address “serious, important” stuff in a way that she couldn’t during her days on E!’s “Chelsea Lately.”

“I look at this as the second part of my career. It’s a little bit more adult,” Handler told the crowd at the Four Seasons Los Angeles. “I definitely feel smarter and more accomplished and better about myself. And more confident. I feel like there’s a strong message in being a single girl that’s chosen not to have a family, chosen not to be married and has chosen my career and am fulfilled by it. I feel like that’s a really strong message and I’m not ever going to let that go.”

“Chelsea” is about halfway through its production of 90 episodes for its first season. Netflix releases three episodes per week. Handler said she tries to stay away from too much emphasis on highly topical material because of the on-demand nature of the way people watch Netflix. But she won’t stay away from a topical subject if she’s particularly inspired to address something.

More than anything else, Handler wanted to rewrite the rules of hosting a talk show. Some episodes feature her visiting far-flung locals like Russia or Tokyo, and some feature her having a dinner party talking about metaphysical subjects with an eclectic group of guests.

“I wanted it to be an informative kind of show that I was excited about doing,” Handler said. “I wanted to break the format. I didn’t want to do a format where I got up, did a monologue, sat down, had guest, guest and a band. I wanted it to be different.”

Handler said she no longer feels as if she’s competing with the late-night roster on linear TV. The experience of working for Netflix, with its massive global reach, is very different — and she’s not complaining.

“They’re a different culture. You have to respect that,” she said. “I’m with them. I don’t want to fight with them — not right away.”

Handler said she feels like she’s hit a groove with the show — although she allowed that she was not too happy with the first month’s worth of episodes. “Chelsea” has been renewed for a second season. Sarandos and others at Netflix tell her they’re happy with the series.

“It’s like positive reinforcement — ‘We like when you do that,’ ” she said of the feedback she receives from execs. But they have yet to give her detailed information about her viewership. “I don’t think they trust me enough to give me that information,” she joked.

Handler does pick up feedback about her audience from social media. She has had to boost her activity on Facebook, Twitter and Snapchat to enhance her profile. “It’s gross, it’s disgusting,” she said of social media. But she sees it as the price of doing business. “I’ve wrapped my head around it,” she said.

It didn’t take long for the subject of Donald Trump and the extraordinary 2016 presidential race to surface during the conversation. Handler has put a big focus on politics and highlighting people who get into politics “for all the right reasons” on her show. And she admitted that there has been some upside to Trump’s campaign.

“It’s kind of great to have a person like that represent everything that’s wrong in the world,” she said. “It’s always a good thing to look at somebody and say, ‘That’s the worst thing that could happen.’ I think we should keep him in the spotlight — not as president, obviously.”

Handler also noted the connection between Trump and the other big media story of recent weeks, the downfall of Fox News CEO Roger Ailes amid rampant reports of sexual harassment sparked by the lawsuit filed by former Fox News anchor Gretchen Carlson. Handler pointed to the fact that Ailes, a political vet, is now advising Trump.

“Only in this day and age would a man who gets fired for sexually harassing numerous women … be working with Donald Trump on his campaign for the presidency. In what world is that alright?”

Pressed on the subject of sexism in the industry, Handler said she herself had never felt victimized because of her gender. She was accustomed to standing out in the male-dominated standup comedy scene.

“In my career I’ve done more sexual harassing that I’ve been sexually harassed,” she said. But she quickly added on a more serious note: “If you’re a powerful woman and that happens to you, you have a responsibility to tell everybody and make it public. If it happened to you, it probably happened to 50 or 100 others,” she said.