Continue to Variety SKIP AD
You will be redirected back to your article in seconds
Nov 10, 2016 12:43pm PT 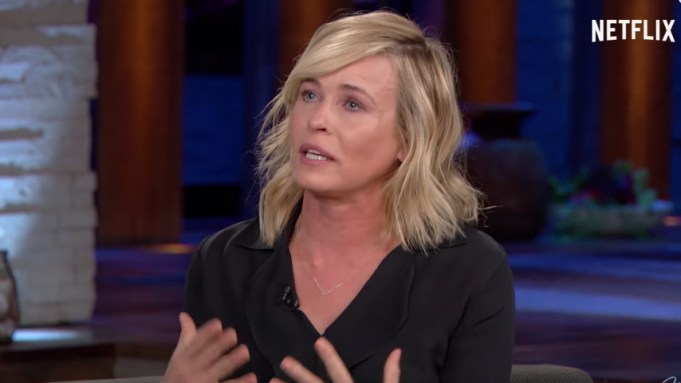 Chelsea Handler fought back tears several times during her Netflix talk show while discussing the outcome of Tuesday’s presidential election.

The host was emotional right from the top of her show.

She was later joined by Senator Barbara Boxer (D-Calif.) who also expressed her disappointment over Donald Trump’s victory. “My heart’s on the floor,” Boxer said. “I have learned how painful politics can be. But that doesn’t mean you run away. It means you pick yourself up, as the president said, and you fight even harder for your country, because it’s ours. It’s ours.”

When asked if she had spoken to Clinton since the results, Boxer said she hadn’t. “No, I did not want to speak to her at this point,” Boxer said. “I like to write,” she explained emotionally. “I have too much to say. I want to think about it.”

“I know as a woman, it feels so sexist,” Handler responded, beginning to cry. “I guess the message that I want to spread out to other women is to not give up — sorry, I hate f–king crying on camera — because this is so important. It’s easy to throw in the towel and say that we’re gonna leave, or I’m gonna move to Spain. Because I want to move to Spain, I really, really want to move to Spain right now. And everyone in my office is like ‘you have a responsibility. You have a voice and you have to use it and you have to be here.'”

The segment ended on a hopeful note, with Boxer praising the women who won Senate seats, including Kamala Harris, who is replacing her.