Continue to Variety SKIP AD
You will be redirected back to your article in seconds
Jul 29, 2016 10:56am PT 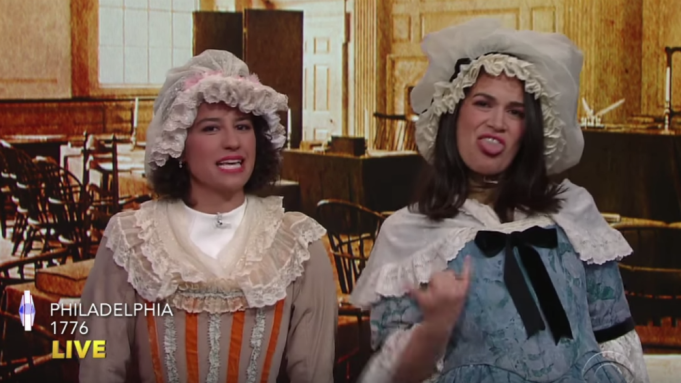 But, with such a feat being a major milestone for women’s rights, he first traveled back to July 4, 1776 to share the news with Josephine Hindley and Abatha Whitmore (Glazer and Jacobson in costume), two female delegates from the Second Continental Congress.

“I know you guys are busy putting the finishing touches on the Declaration of Independence right now, so I’ll make this quick,” Colbert said. “I just wanted you to know that it’s 2016 and we finally have a female presidential nominee.”

Overjoyed from the news, Jacobson yells, “Well butter my bonnet, that is incredible. I’m going to celebrate by making a meal for my husband, and then cleaning it up immediately.”

But, there’s some confusion. The colonial women think Colbert is reporting from the year 1816. So when the host clarifies that he is delivering the information from 2016, the excitement wanes quickly.

“What the butter is wrong with all of you people? Why did it take so long?” Jacobson said.

After the skit, Jacobson and Glazer sat down with Colbert out of character, and shared a few words on their support of Clinton.

“I don’t think you could watch tonight and this week full of these amazing speeches and not feel she is just the best candidate,” Jacobson said.