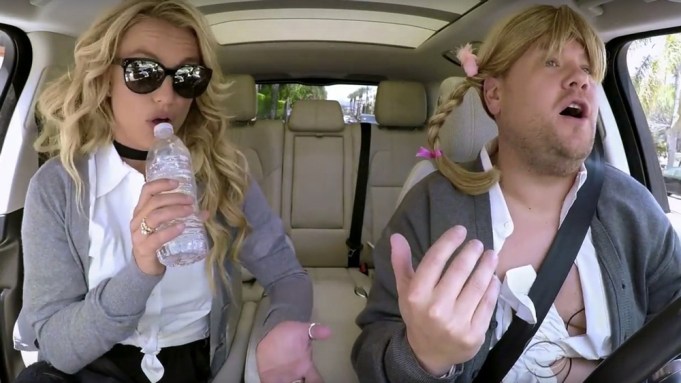 She did it again!

Britney Spears became the latest superstar to ride shotgun with James Corden on “The Late Late Show’s” newest edition of “Carpool Karaoke.” The songstress took a trip down memory lane, revisiting such hits as “Womanizer,” “Make Me,” “Toxic,” and “Oops!… I Did It Again” during her “Carpool” debut on Thursday.

And if you think you’re the only who doesn’t understand the lyrics to the famous tune “Oops,” think again. Not even Brit Brit knew the meaning of the song. “I really don’t know,” she told Corden. “I think it’s just a song.”

The highlight of the ride came when the dynamic duo recreated the music video for the iconic “… Baby One More Time,” wearing schoolgirl uniforms. Aside from rocking a gray cardigan and white knot-tied button-down, Corden one-upped Spears herself with a pair of pigtails.

Spears didn’t do much singing on the segment, as expected (perhaps thinking she was on “Lip Sync Battle” instead), but she did get candid with Corden (even talking bondage).

The pop star revealed that she wants three more children, although she’s “done with men.”

“I think I might not ever go to men again, ever do the whole men thing anymore, or get married,” Spears said. “I mean, I may French kiss someone, but I’m not going to marry anyone. I don’t believe in marriage anymore.”

Spears’ new album “Glory” was released on Friday and she’ll be performing at the MTV Video Music Awards on Sunday.