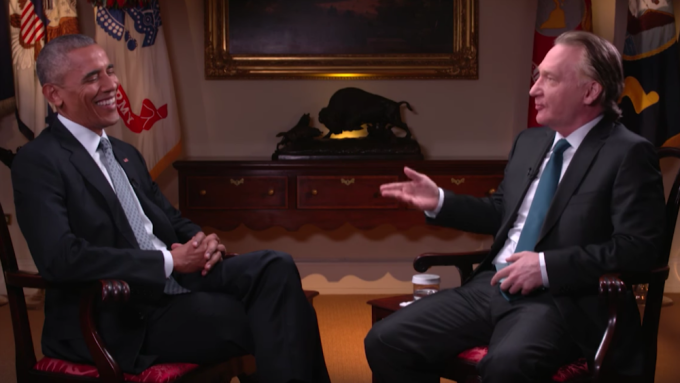 President Barack Obama joined Bill Maher for an extensive interview that covered a range of topics including the media and the current election. An extended cut of the interview was posted online Friday with a more tightly-edited version running on “Real Time.”

The interview was closure on a long history of Maher asking Obama to come on his show, including a petition that he launched earlier this year.

One topic the two covered was the current mistrust of the media.

“I think the question I’d have when it comes to the media is, ‘How do we create a space where truth gets eyeballs and is entertaining and we can build a common conversation?'” Obama asked. “When I leave here, one of the things I’m most concerned about is the balkanization of the media,” he said. “People have difficulty now just sorting out what’s true and what’s not.”

Later in the interview, Obama expressed a desire to sit and have a talk with every person in America individually. “The problem is, we’ve got all these filters,” he said. “Look, if I watched Fox News, I probably wouldn’t vote for me either. Because you’ve got this screen, this funhouse mirror, through which people are receiving their information. How to break through that is a real challenge.”

At the end of their interview, Obama weighed in on the current presidential election.

“The stakes are high,” he said. “The choice in this election should be really clear.”

Obama said that the common refrain that “both of them have problems” is, in his opinion, not a fair assessment because electing Donald Trump would most likely mean many of his policies would be reversed, or at least attempted to be changed.

“Every single issue that we’ve made progress on in the last eight years is gonna be on the ballot in the form of this choice,” he said.

“I have worked with Hillary Clinton. I know her and she is somebody who cares about these issues, she does her homework, she cares deeply about ordinary folks, her policies are aligned with yours and mine… And, yes, she is somebody who believes in compromise so that you don’t get 100 percent of what you want, but you know what? That’s the way this democracy works. Anybody sitting on the sidelines right now or deciding to engage in a protest vote, that’s a vote for Trump and that would be badly damaging for this country and it would be damaging for the world. So no complacency this time.”

(Watch the full interview above)