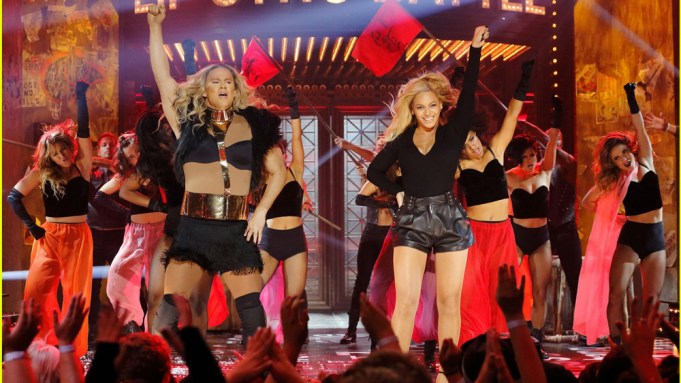 Jenna Dewan Tatum may have brought the magic to Thursday night’s “Lip Sync Battle” premiere, but her husband Channing Tatum ran the show thanks to a little help from Beyonce.

Queen Bey made a surprise appearance on the “Tatum Takeover” edition of the Spike show during the “21 Jump Street” star’s performance of her 2011 favorite “Run the World (Girls).” Tatum — dressed to the nines in a black bra, fur vest, fringe skirt, gold chocker-belt combo and blonde locks, of course — even gave the pop star a run for her money.

Dewan Tatum stood on the sidelines in shock before putting her hands on her head and collapsing to the floor.

Beyonce will be joining another big name on stage come Feb. 7. The Grammy winner is set to perform with Coldplay at the Super Bowl 50 halftime show, it was announced Thursday.

Tatum — dressed as the “Frozen” princess Elsa — also twirled and pranced to Idina Menzel’s “Let It Go” from the Disney blockbuster.

Not to be outdone, Dewan Tatum lip synced to Ginuwine’s “Pony,” the 1996 hit Tatum famously grinded to in his “Magic Mike” movies. Lucky for Tatum, he was the one pulled on stage for his wife’s lap dance.