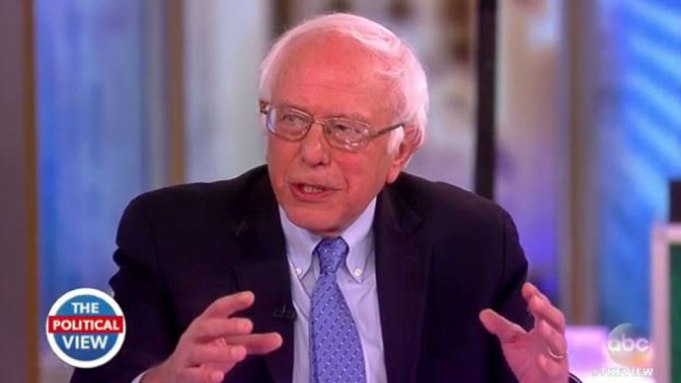 Bernie Sanders appeared on “The View” Monday to discuss the outcome of the presidential election and Donald Trump’s victory.

The Vermont senator, who lost the Democratic nomination to Hillary Clinton, said Trump was able to connect with the working class in a way the Democratic Party could not.

“Trump touched a nerve on the part of millions of people,” Sanders explained. “You have a middle class for the last forty years that has been shrinking … You got millions of people living in extraordinary economic anxiety, and meanwhile, the very richest people and largest corporations are doing phenomenally well. And people are saying all over this country — black and white and Latino — ‘What about me? Whose going to stand up for me?,'” Sanders said. “In my view, the Democratic Party has not been as strong as it should be in saying it will stand with the working people.”

Joy Behar asked Sanders what he thought about claims he would’ve won the election if had the party’s nomination.

“Who knows and who will ever know,” Sanders replied. “The point is we have to talk about the future and how we go forward.”

The Senator then listed all the promises Trump made during his campaign: higher wages, pay equity, infrastructure improvements, trade, prescription drugs. Sanders agreed with the President-elect on several of these issues, and said he would keep him accountable.

Sanders then denounced all the discrimination that has permeated Trump’s campaign and continued after his victory.

“We are not going to accept a president trying to divide us up. Our enemies are not some Latino guy, some Mexican-American working in a tomato field making nine bucks an hour,” Sanders said. “Those are not our enemies and I don’t want millions of people being worried today about families being separated. I’ve seen too much of that. We’re going to fight against sexism, racism and xenophobia.”

Sanders also brought up climate change, an issue that Trump has called “a hoax.”

“He better start listening to the scientific communities and not just the coal company and the oil companies. If he doesn’t, you’re not going to have much of a planet left for your grandchildren,” Sanders warned.

Sanders had strong words for FBI Director James Comey and Steve Bannon, whom Trump appointed as senior adviser over the weekend.

Sen. @BernieSanders on FBI’s letter to congress on Clinton’s emails: “I think what the FBI did was unacceptable.” pic.twitter.com/uIQu7PfJ30

“What the FBI did was unacceptable. They got involved in a presidential election in an unprecedented way,” referring to Comey opening up another investigation of Clinton’s emails just days before the election.

But Sanders was critical of Clinton’s ability to reach out to the electorate as well. “I think it’s fair to say the working class in this country did not believe she was prepared to stand up and fight for them.”

He said Bannon should get us very nervous, alluding to Bannon’s affiliation with the alt-right site Breitbart. “I will be damned if we’re going to backwards and try and divide this country again … We’re going to tell Mr. Bannon and any other advisers, we’re not going to be turning on each other, we’re going to be standing together.”