Barbra Streisand and ‘Donald Trump’ Perform Together on ‘The Tonight Show’ 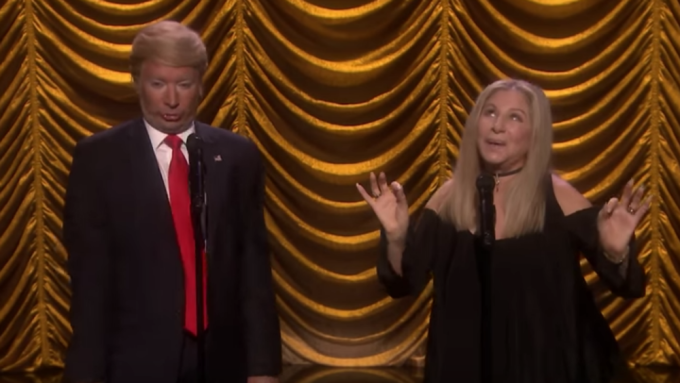 Barbra Streisand appeared on “The Tonight Show Starring Jimmy Fallon” on Thursday night, where she performed a duet with “Donald Trump,” or rather Fallon dressed as Trump, and also settled the score with Siri on the pronunciation of her name.

The pair performed “Anything You Can Do, I Can Do Better” from the musical “Annie Get Your Gun,” with modified lyrics poking fun at Trump. Streisand, who has been a critical opponent of the Trump campaign, took no remorse in shaming the Republican presidential nominee.

“Any wall you can build, I can build taller, I can building any wall taller than you,” Fallon sang.

While also on the show, Streisand discussed the much talked-about pronunciation of her name, specifically regarding the the way iPhone’s Siri says it. She even went so far as to call Apple CEO Tim Cook to change the pronunciation.

“Streisand with a soft S, like sand on the beach,” Streisand said. “I’ve been saying this for my whole career. And so what did I do? I called the head of Apple, Tim Cook, and he delightfully agreed to have Siri change the pronunciation of my name, finally…”

Streisand said the error will be fixed on iOS’s Sept. 30 update. Given Cook’s blessing, Fallon and Streisand then took to Siri to settle the debate.

“Siri, you are wrong,” Fallon yelled. “I’m sitting next to her right now.”

“If you insist,” Siri replied.