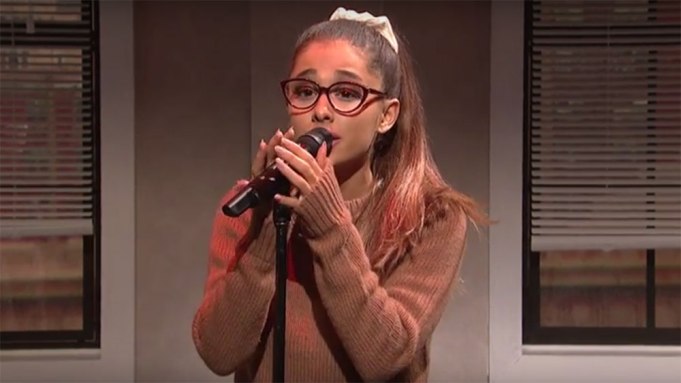 Ariana Grande’s not-so-secret talent is using her impressive pipes to do uncanny impressions of pop stars, and “Saturday Night Live” took full advantage of her unique ability when the singer hosted the show this weekend.

In a sketch that spoofed Tidal’s streaming issues, the power goes off at the company and puts it at risk of losing music. And if anyone can save Tidal, it’s Chloe the Intern, played by Grande.

Grande goes on to impersonate big stars for the company, including Britney Spears, Shakira, Rihanna, Celine Dion and Whitney Houston. While she doesn’t quite know the words to Rihanna’s single “Work,” she gives a stunning rendition of Houston’s “I Will Always Love You.”

But the one star Chloe won’t impersonate? Grande, as Chloe’s “not a fan.”

Grande has showed off her impression skills on television before, impersonating such stars as Christina Aguilera on “The Tonight Show With Jimmy Fallon.” The sketch also seems to mirror a previous one from “SNL,” where Bruno Mars saves Pandora by doing impressions of Michael Jackson, Steven Tyler and others.

Grande started off her hosting gig with a bang, dropping some unexpected profanity during her opening monologue. The slip was edited out for the West Coast airing.