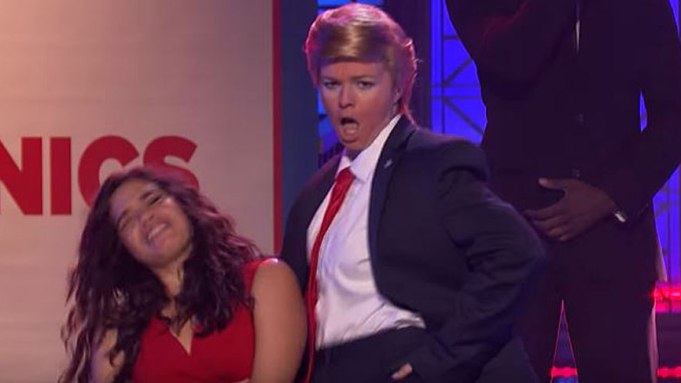 Amber Tamblyn dons a golden wig and orange make-up to mock Donald Trump in a clip from her upcoming “Lip Sync Battle” appearance.

The actress grinds provocatively up against her competitor and “The Sisterhood of the Traveling Pants” co-star America Ferrara while mouthing the words to “I Wanna Sex You Up” by Color Me Badd. Banners reading “I Love Hispanics” and “Make America Great Again” (Trump’s campaign slogan) hang in the background while fake secret servicemen pretend to secure the scene. The banners are in response to the GOP candidate’s previous attacks on the Hispanic community. Ferrara is Latina and spoke at last July’s Democratic National Convention in support of Hillary Clinton.

Last week, Tamblyn posted a scathing social media post, sharing her feelings about Trump’s now  infamous “Access Hollywood” video. In the Instagram post — which you can read in full below — Tamblyn described being sexually abused by an ex-boyfriend.

“That part of my body, which the current Presidential Nominee of the United States Donald Trump recently described as something he’d like to grab a woman by, was bruised from my ex-boyfriend’s violence for at least the next week,” she wrote. “I had a hard time wearing jeans. I couldn’t sleep without a pillow between my legs to create space.” Her account was accompanied by a photo of Trump kissing Miss Universe 2012 winner Olivia Culpo on the cheek.