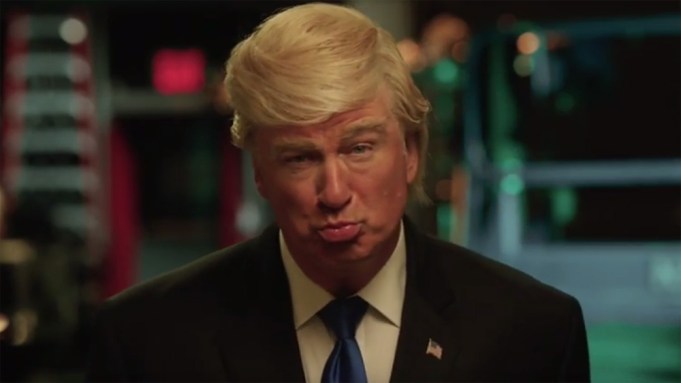 Alec Baldwin will be making a guest appearance as Trump in what will likely be a parody of the nominees’ recent presidential debate, as shown in a new promo that NBC released on Wednesday. In it, Baldwin can be seen getting into character, donning some bushy white eyebrows and a suit jacket.

According to a source, viewers can expect to see Baldwin play Trump throughout the election cycle.

“SNL” cast member Kate McKinnon, who’s also seen in the promo, will reprise her Clinton impression, one that’s been put to good use during this election cycle. At the end of the promo, Baldwin does his best Trump face, pursing his month in a full blonde wig.

Baldwin has been a presence on “SNL” for decades. He made his first appearance on the show in 1990, and has since guest-hosted a record-breaking 16 times. Among his celebrity impressions is Gov. Rick Perry, who was also a Republican presidential hopeful.

“SNL” made headlines last year when it had Trump host a November 2015 show. The decision drew controversy and protests, largely from Latino groups who criticized Trump’s comments about undocumented immigration from Mexico.

The Oct. 1 Season 42 premiere of “SNL” will be hosted by Margot Robbie, with the Weeknd serving as musical guest.