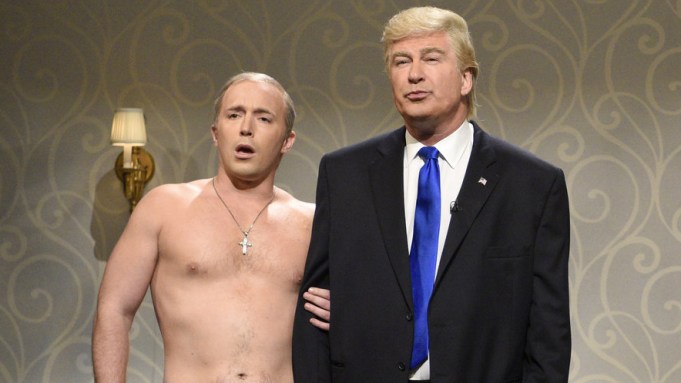 Alec Baldwin was back in his now-regular role as the president-elect, while John Goodman made a surprise visit as Rex Tillerson, the ExxonMobile executive who is Trump’s pick for Secretary of State. Cecily Strong also made a brief appearance as Melania Trump.

The sketch referenced most of the Trump-related headlines from the past week, from the transition team’s struggle to line up big-name talent for the inauguration to his feud with Vanity Fair magazine to the appointment of former Texas governor Rick Perry as Secretary of Energy — even Trump’s mangling of the word “unpresidented” instead of “unprecedented” in a recent tweet. But the biggest target was the growing evidence that Russia directed hackers to target the U.S. in order to influence the outcome of the presidential election in favor of Trump.

The sketch opened with Trump and Kellyanne Conway (played by Kate McKinnon) inside Trump Tower, discussing his “thank you” tour as Conway tries to impress upon Trump his duties as commander-in-chief.

“Can’t I just do it three days a week like Howard Stern does,” Trump asks. A shirtless Putin (played by Beck Bennett) slides down the chimney to present Trump with an Elf on the Shelf doll. “You just place it right here next to your Internet router,” Putin says, a reference to the hacking scandal.

Well, look who came down the chimney! #SNL pic.twitter.com/0R9o81HvlY

Goodman’s Tillerson bursts into the room to deliver a warm welcome to his old friend “Puty.” The two start talking business about oil drilling and ignore Trump, who is stewing instead about wanting to destroy Vanity Fair.

“Saturday Night Live” has drawn Trump’s ire — and critical tweets — for its spoofing of all things Trump, particularly Baldwin’s portrayal of him. Baldwin last week offered to stop doing the impersonation if Trump would release his tax returns.

“Manchester By the Sea” star Casey Affleck is hosting tonight’s installment. Chance the Rapper is the musical guest.