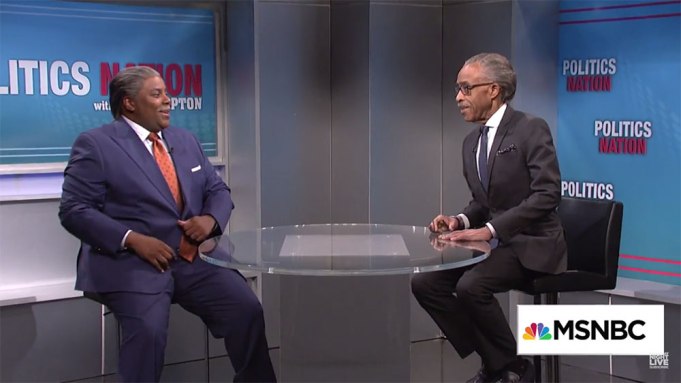 Kenan Thompson’s Al Sharpton impression was put to the test against the real thing on this weekend’s “Saturday Night Live.”

Thompson brought back his Sharpton in a fake news segment, with the real Sharpton stopping by as a statistical analyst. The two looked at the Black Approval Ratings of the presidential candidates, and things do not look good for the Republican party.

Hillary Clinton scored well, with the real Sharpton explaining that Bill Clinton is embraced by the black community. Ted Cruz, however, scored just a 2.1. “Look at him,” Sharpton explained. “You just know he’s up to something.”

It looked even more bleak when they reach Donald Trump. “Right now, Donald Trump has a Black Approval Rating for negative 1,048,” Sharpton said. “But that could go down.”

“Black people should never trust a white person whose hair is more processed than theirs,” Thompson added.

Thompson’s Sharpton did have some trouble pronouncing words throughout the segment, which was called out by the real Sharpton — but Thompson explained that “all this weight fluctuation” was messing with his brain.

Russell Crowe hosted this weekend’s episode. Julia Louis-Dreyfus will return to host “SNL” for a third time on April 16, with Nick Jonas serving as musical guest.