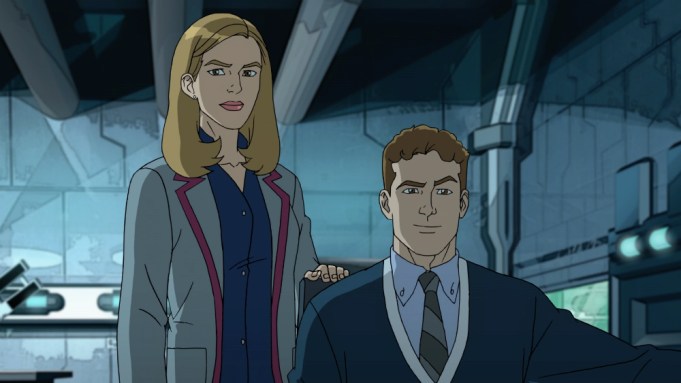 “Marvel’s Agents of SHIELD” returns for its midseason premiere on Tuesday, March 8, with an episode that will deal with the fallout from the eventful winter finale, which saw Director Coulson (Clark Gregg) and Leo Fitz (Iain De Caestecker) narrowly escape from a terrifying alien planet after battling Grant Ward (Brett Dalton) and a murderous Inhuman who had taken over the body of astronaut Will Daniels (Dillon Casey) in its attempt to get back to Earth.

Will’s body was destroyed in the fight, but after Coulson killed Ward, the Inhuman chose the former SHIELD agent as its new host, making it out through the portal to reunite with Hydra leader Gideon Malick (Powers Boothe) in the final moments of the winter finale. In the March 8 episode, “Bouncing Back,” we’ll see the emotional repercussions of Coulson’s choice and Fitz’s failure to rescue Will, who shared a bond with Fitz’s lab partner and longtime love Jemma Simmons (Elizabeth Henstridge).

Things are certainly fraught on the ABC drama, but fans of “FitzSimmons” will be able to see a lighter side of their favorite duo thanks to an upcoming cameo on Disney XD animated series “Marvel’s Ultimate Spider-Man vs. The Sinister 6.”

Henstridge and De Caestecker will lend their voices to the March 13 episode of “USM,” which will see the pair doing what they do best in the lab, but this time, helping Spider-Man. In Variety‘s exclusive clip above, the two lovebird lab rats help investigate the sources of malfunctioning tech for Spider-Man and Iron Spider.

While Marvel mainstay Clark Gregg has made numerous appearances on “USM” since the animated series debuted, this is the first time any of his fellow “Agents of SHIELD” cast members have made a cameo.

In the episode, titled “Lizards,” due to Vulture’s revelation that Doc Ock has a spy inside the SHIELD Academy, the Web Warriors decide to search for the mole. When they confront Dr. Curt Connors, he seemingly turns himself into The Lizard and attacks SHIELD with a venomous bite that spreads like a virus, also turning its victims into lizards.

“Marvel’s Agents of SHIELD” airs Tuesdays at 9 p.m. on ABC; “Marvel’s Ultimate Spider-Man Vs. The Sinister 6” airs Sundays at 9 a.m. on Disney XD.