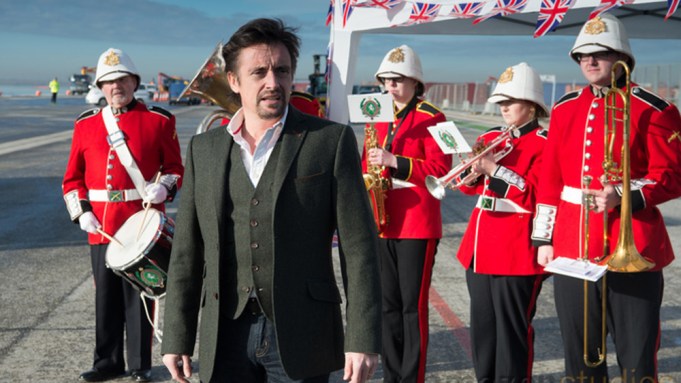 “The Grand Tour” was expected to provoke controversy, and the sixth episode of Amazon Prime’s flagship motoring show has delivered with a gag from co-host Richard Hammond suggesting that “eating ice-cream is gay.”

Hammond’s comment came as Jeremy Clarkson, addressing a live audience, pointed out that you “couldn’t enjoy a chocolate Magnum ice cream” in a Volvo with white seats.

“It’s alright, I don’t eat ice cream,” Hammond said. “It’s something to do with being straight,” he added, to applause and cheers from the audience.

Probed by Clarkson — “You’re saying all children are homosexual?” — Hammond went on to maintain that “Ice cream is a bit… you know. There’s nothing wrong with it, but a grown man eating an ice cream — it’s that way, rather than that way.”

U.K. newspapers The Independent and The Guardian, which called “The Grand Tour” a “zombified corpse” of “Top Gear,” have published articles on Hammond’s comments and the reactions to it.

Hammond’s “pandering to prejudice is bad enough but the audience applause makes it worse. It shows that we still have some way to go to end bigoted banter,” human rights campaigner Peter Tatchell is quoted as saying by The Guardian. Meanwhile, internet reaction have run from the incredulous to indignant to jocularly mocking.

“HELLO, I HAVE BEEN EATING ICE CREAM FOR YEARS AND I’M STILL HETEROSEXUAL WHAT I AM DOING WRONG? PLEASE HELP,” pleaded Twitter user TechnicallyRon.

All of which poses a question: As “The Grand Tour” episodes become remembered for the controversy they cause, rather than, apart from the grand first segment, the content itself, is this an incentive for its makers to be less 1953?

.@RichardHammond HELLO I HAVE BEEN EATING ICE CREAM FOR YEARS AND I'M STILL HETEROSEXUAL WHAT I AM DOING WRONG PLEASE HELP