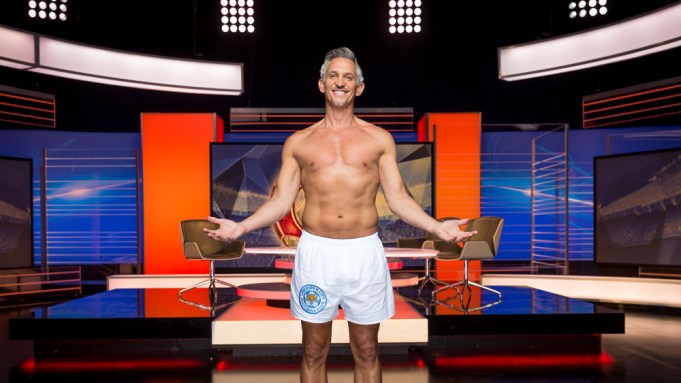 Courtesy of the BBC

The host of England’s top TV show about soccer presented the first episode of the new season in his underwear — the result of a wager gone wrong. The global media coverage for the stunt reflects the huge interest in the English Premier League, which generates almost $4 billion a year from worldwide broadcasting rights.

Former professional player Gary Lineker, who fronts the BBC’s soccer highlights show “Match of the Day,” appeared on Saturday in just his boxer shorts to honor a bet made in December when he said on Twitter that if Leicester City, the team he supports, won the English Premier League he’d host the first episode of the next season in his “undies.” Underdogs Leicester had been 5,000-to-one outsiders at the start of the season but battled through to become champions.

Lineker only remained semi-naked for the first part of the show, and some on social media claimed he had chickened out as his shorts weren’t skimpy enough. He responded on Twitter: “My tweet said undies. Boxers are undies. That was embarrassing enough thanks.”

Lineker’s honoring of the bet made headlines across major U.K. news outlets as well as many international sites, including CNN, the Washington Post and Saudi-owned Al Arabiya, as well as websites in places as far afield as New Zealand, Malaysia and Nigeria. CNN best reflected the sentiment of the coverage: “Nobody can accuse Gary Lineker of not being a good sport,” it reported.

England’s top-tier soccer league is one of the globe’s most widely watched sports leagues, and attracts some of the world’s leading players and managers. Among the new additions to the league this season are Zlatan Ibrahimovic and Paul Pogba, who became the world’s most expensive soccer player when Manchester United paid £89 million ($115 million) for him recently.

The league also attracts some of the highest prices for TV rights for a sports league in the world. In the U.K., BBC paid £204 million ($263 million) for three seasons for the highlight rights. Pay TV operators Sky and BT paid £5.136 billion ($6.641 billion) for live coverage in the U.K. for the next three seasons. That equates to a total £1.78 billion ($2.3 billion) a year for the U.K. rights. International rights, including NBC in the U.S., adds another £1.1 billion ($1.42 billion) a year, according to Deloitte, which gives the English top-tier clubs revenue from broadcast rights of £2.88 billion ($3.72 billion) a year.