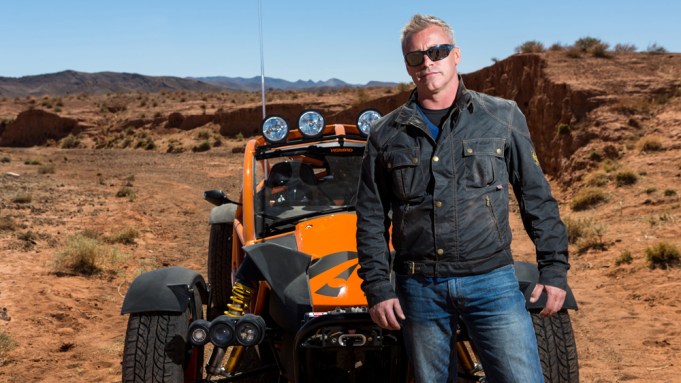 “Top Gear,” the world’s biggest motoring show, relaunches in the U.K. on BBC on Sunday and in the U.S. on BBC America on Monday with a new lineup of hosts — led by Chris Evans and Matt LeBlanc – and some fine tuning to the format, including a significant change to the “Star in a Reasonably Priced Car” segment.

Series editor Alex Renton, who has been with the show for about 11 years, tells Variety that “Star in a Reasonably Priced Car,” in which a celebrity races an affordable hatchback around the track at the show’s home, Dunsfold, has now become “Star in a Rallycross Car.”

“We’ve always talked on ‘Top Gear’ about rallycross as being the best form of racing out there,” Renton says. “That type of racing on a mixed surface – between tarmac and a lose surface – is an exciting spectacle to watch, and it is really exciting to drive. So we’ve added a couple of extra sections on the celebrity lap so they can go through a water splash and go over a jump.”

He adds: “It’s great fun – they can do big skids and go through water, and over jumps to get some air, and it’s all been worked out so they can get some good speed. We’ve got a new car as well, which allows them to go a bit faster – it’s got a bit more power.”

But, despite the new hosting team that totals seven, including The Stig, the white-clad mystery racing-driver, the show in essence stays the same. “What we’ve tried to do is take things from before that we know have worked and improve them. We want to keep it very familiar,” Renton says. “Our audience and everyone involved in the show is a big fan of ‘Top Gear’ and what’s gone before and we want to be respectful of and faithful to that brand. I think we have achieved that with what we’ve tweaked and we’ve just given a lick of paint to the show – like we’ve literally done to the track and the studio. Beyond that the format points are the same.” Among the returning elements are the track tests of super cars carried out by The Stig; the road tests; and the big road trips and adventures.

That said, the introduction of the new team of hosts – which includes Eddie Jordan, Sabine Schmitz, Chris Harris and Rory Reid – has influenced the show. “They will instantly inject a new feel, which makes everything feel very fresh and I’ve been delighted with how the films have been turning out – they’ve been fantastic, and the way the guys have taken to it and the car reviews and all the trips and adventures that we’ve been on … It’s been fantastic fun,” Renton says.

Nonetheless, the tone and ethos of the show remain the same. “The whole essence of ‘Top Gear’ has always been that the car is the star. You start with the car and it’s about people’s passion for cars. Everybody drives; everybody has a car that they love; and if you are into cars it is about the relationship with that car, and it is about the relationship with that person in that car with you as well. Once you capture that and you are able to go on a road trip then that really comes to life,” Renton says.

“If you keep to that very simple core of it being a car show with a passion for cars those relationships come through from that, and it becomes about people’s relationship with each other and with the landscape, and that’s how ‘Top Gear’ originally grew, and I think we are staying true to that.”

The studio at Dunsfold has been revamped to create more space for the audience – now increased to around 800 – with the addition of a balcony, as well as space for more cars. “The atmosphere was electric,” Renton says of the episode he’s just recorded. “There were more people in there and that’s where the energy comes from if they are enjoying what they’re seeing.”