Tracee Ellis Ross, Courtney B. Vance on Intensity of Working in TV, Addressing Race in Shows 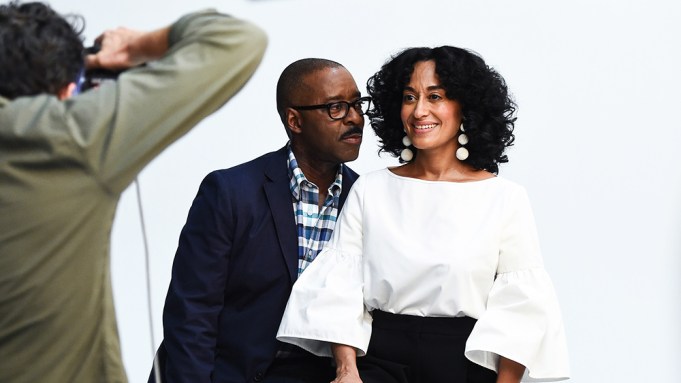 Tracee Ellis Ross: There’s a thing you bring to Johnnie Cochran that obviously is your craft, but how much of it is your point of view? How much of it is the research you did or didn’t do?

Courtney B. Vance: I knew once we started shooting we were going to be doing three and four episodes at the same time. They were going to be flying, and I would have no time to do any kind of homework. And I said, “I’m not going to worry about what other people think.” I turned that sound off.

Ross: In the courtroom scenes, was there a lot of letting those moments run free?

Vance: We were in the zone. We were flying at the speed of sound and then some. I actually found out that there were going to be five cameras with the crane coming in, and two or three guys on little stools that move back and forth, and a steadicam, and they all started moving on my coverage — so much so that I couldn’t see the gentleman playing Lance Ito. I literally couldn’t see him. And it threw me. But I said to myself, “That’s not gonna happen again; I’m going to be ready from this point on, no matter what happens.”

Ross: [Doing homework] doesn’t work with the pace on “Black-ish.” It’s not that we have to keep up with shooting two or three episodes at the same time, but we’re shooting an episode every five days. We do 14- and 16-hour days.

Ross: There’s no way you can go home and learn lines, because you need to go home and sleep. So I’ve figured out systems. I order two lunches so I can eat dinner before I leave work, so when I get home I can just go to bed. Especially with Anthony [Anderson] and me, the magic happens in almost the not-preparation. By the time you’ve been an actor this long, the muscle of learning lines is easy.

Ross: It’s a really interesting process. We did eight years on “Girlfriends.” And to be the same person for that long, it becomes part of [you]. But on “Black-ish,” so much of the magic happens in the moment.

Ross: It’s the most delicious experience. I love working with Anthony because we have similar styles of going with it. We both know our lines, so if you have the same kind of professionalism and the same respect for the craft, no matter how much we play, when we hear the “A” word, we’re in. And it’s just magic. And on our show, we balance heavy topics with comedy.

Vance: Because you’ve got to laugh through the pain, too. That’s why the show is so beautiful — because as a people, we have gone through so much. I was 7 and 8 when Martin Luther King was shot and Malcolm X and Bobby Kennedy and John. How did our parents live, survive?

Ross: And hold on and thrive. This is the part that always baffles me. There are times when I think of being a black person in this country, and me being a woman. There’s a moment in your show when he says, “In 1988, that was not considered rape.” And you think of the Robert Shapiro character in this piece that you are in, saying please don’t do this now, as if it is you being burdensome, and how come you can’t just leave this alone, this race thing. How courageous of “Black-ish” to be touching on these topics.

Vance: What a beautiful thing that on a TV comedy seen by millions every week, we can talk about it. I mean for the longest time…

Ross: We have not.

Vance: … we didn’t talk about it. Our parents talked about it, and we heard it, just like the children in your show. But now we’re watching that conversation happen on television — and all people can watch it. Black, white…

Ross: That’s one of the things that’s amazing to me. “Black-ish” is set in current times. So doing a police-brutality episode in current times, when kids are watching our show, it gives them an access point to have these kinds of conversations as a family. That’s one of the things I love: People watch as a fam-ily. And we have all these different generations. It’s character-based, so we’re not touching on these things because they’re circumstantial or situations, but because this is how these people would be interacting. What’s amazing to me watching “People v. O.J.” is how similar these topics are. How do you tell the stories with the nuance they deserve? Because these are topics that have so much nuance in them — so much gray.

Vance: I guess it began with “All in the Family” and “The Jeffersons.” [George Jefferson] would come over to Archie Bunker’s, and that began it. Now we can see ourselves on the television, and just be riveted.