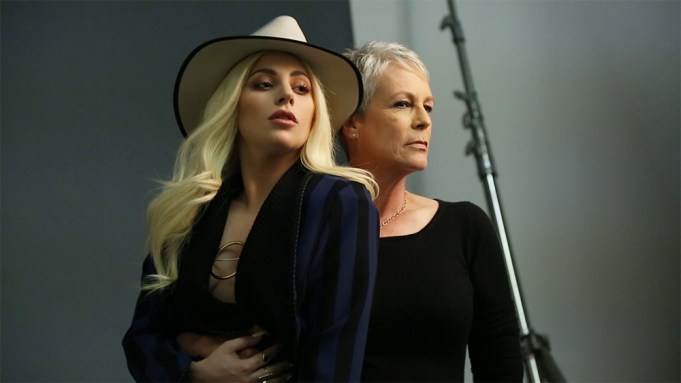 Jamie Lee Curtis: So here’s the question: Is Gaga a character? Because your name is Stefani.

Lady Gaga: I guess the thing is, what I am as Gaga really is what other people think Gaga is. It’s not necessarily what I am. Gaga is this stronger individual part of myself that I discovered being young in New York — loving music, meeting with young artists, working with musicians, with writers, studying the scene, and being involved in the lifestyle. I started to call myself Gaga. [It] was the nickname I had at my best.

Curtis: But it’s a bit of a creation.

Gaga: It is a bit of a creation. But it’s other people that have created [it] through what I’ve made; their perception of what Gaga is, is a separate entity from me. What I am at any given moment is some sort of amalgamation of Stefani — a young Italian-American girl from New York who’s an actress and a songwriter and a rebel — and what I’m creatively interested in at the time: the music and culture and lifestyle and art that’s influencing me as I’m reading and writing music. If I’m playing a character at the same time, I’m also that as well. I live a lifestyle of endless, relentless love for making my work. That informs me as a person in every way, all the time. It’s a quite difficult thing for me to answer, because I’m entirely Stefani and I’m entirely Gaga. But I was also entirely the Countess [on “AHS: Hotel”].

Curtis: You do research as well.

Gaga: Yeah, I did research, all the time, every day. I would watch Robert Durst in “The Jinx.” I would study the practical nature in which he was devious and evil. He has this extremely practical way of explaining how he’s going to conceal the fact that he’s dumped a body in a river and kept it in his house and cut up his best friend. But when he’s explaining to you, “Oh, I was drunk and I was high, and I thought, ‘What am I going to do with this body? I’ve got to cut it up.’ ” It’s like, “I had to go to the store, I was going to make a sandwich, so I had to get the bread and then I had to pick up the ham.” It’s so kind of practical, so I let that inform me as the Countess, because if I was going to take a guy home and f–k him and then eat him, I wouldn’t know exactly how to do that.

Curtis: Which order? (Laughs) I was once on the jury at the Cannes Film Festival, and I remember feeling that I had to be smarter and better than I was, being surrounded by this tremendous amount of talent. I felt very little and insecure, and I ran into Terry Gilliam, who’s a filmmaker and a very interesting guy. He asked me what I was doing, and I said, “Well, I really feel like I should be focusing, and much more serious about my work.” He looked at me and said, “Why don’t you stop trying to be such a f–king good actress and just do what you’re good at.” I never studied — well, I studied with an acting teacher once. I remember we did a scene, and he looked at me and he said, “OK, well, you know how to be other people, so now your entire job is to read, study art, listen to music, take photographs — immerse yourself in art.” Pretending to be somebody else has never been difficult for me. That’s why I was asking about that character of a performer, because I used to play secretary at my house and have hour-long sessions.

Gaga: You must have felt so liberated in some way by being the secretary. There was something about it that gave you a sense of place.

Curtis: Of course, there are tremendously talented actors who I revere, who rip their guts out every time they work, and the work is extraordinary, but there are also extraordinary people who just get up in the morning and do their work.

Curtis: For me, it’s that easy. The only goal for me is to be in some sort of a flow where I’m not in my head. If I had to learn something technical for a job, I’d learn the technical side of it and then forget about it.

Gaga: Absolutely, I understand that. It’s what I feel like when I sing jazz. Ryan [Murphy and I], we used to talk about that on set, because that’s how I understood how to be an actress on film. I rehearse things, but then I throw them out once I get to set. For example, if there’s a moment in a scene when I’m supposed to cry, I’ll rehearse the thoughts that I need to have in order to feel in that moment, or have the thought that will then maybe inspire me to cry. Then I go to set, and as long as I have my lines down — I just throw it out the window. Then it’s just me and [co-star] Matt Bomer.

Curtis: I watched every episode of your show, and I didn’t feel like I was watching someone with technique. I didn’t see it. I think you can see it in some work.

Curtis: I’ll talk to Ryan about making that happen.