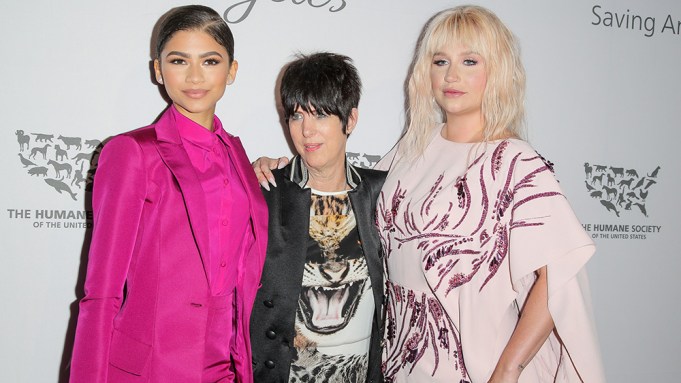 The Humane Society of the United States honored Diane Warren with its Humanitarian of the Year award at its Los Angeles benefit gala on Saturday.

The gala, held at Paramount Studios NYC Back Lot, brought out Jon Bernthal, Kate Mara, Zendaya and Ian Somerhalder for a night of celebration and advocacy for the better treatment of farm animals.

“To those in the audience who are already vegetarian or vegan, thank you. We are making a huge difference knowing that kindness to all creatures is not an option but the only way. For those not there yet, realize that when you eat meat you’re not eating something. You’re eating someone,” said Warren, during her acceptance speech.

A long-time activist, Warren said she becomes more connected to animal protection everyday as she “realized there’s no difference in an animal’s life.”

“They have hearts and souls. They want to live. We have no reason to treat them like they (factory farm workers) do and murder them to eat them,” said Warren.

The Oscar-nominated and Grammy-winning songwriter was presented with the award by Zendaya, who said Warren “challenges others to be authentic and brave.”

The Humane Society has convinced more than 100 of the largest food retailers to end animal confinement practices and highlighted undercover investigations which routinely expose animal abuse and food safety violations.

The organization’s “Meatless Monday” program has been adopted by 50 hospitals, 100 colleges and 135 school districts in the U.S. and have increased plant-based options in cafeterias in recent years.

“As we live our lives and live in humane ways with nature and animals, one of the most important things we can do is pass that on to our kids,” added Bernthal, recognizing his son Henry, who he said “rescues countless lizards out of pools, pulls worms out of streams and he’s helped me rescue a stray dog.”

The gala was hosted by singer-songwriter Moby, who kicked off a string of Donald Trump-inspired punchlines with, “There’s a special place in hell for CEOs who set up factory farms. Somewhere below pedophiles and Trump supporters.”

Attendees were treated to a two-course vegan meal, dessert, after-party and performances from Leona Lewis singing “I Was Here” and Steven Tyler singing “I Don’t Want To Miss a Thing.”

Kesha fought through tears to give an emotional and heart-tugging performance of “Til It Happens To You” to which she received a standing ovation.

The Humane Society of the United States raised over $100,000 via a live auction to continue its fight to improve the conditions of farm animals and animals across the world.