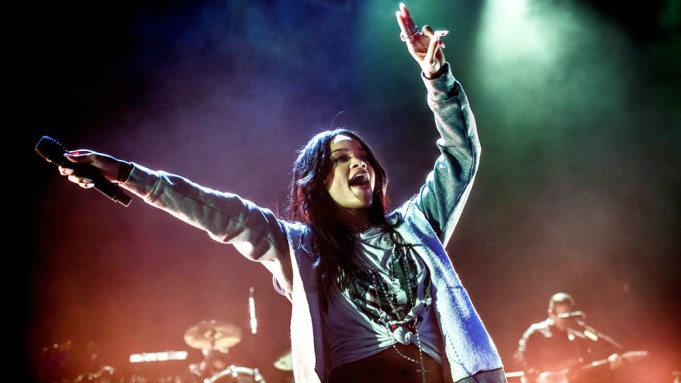 Calvin Harris brought out Rihanna during his Sunday night performance at Coachella.

Rihanna, who wasn’t scheduled to appear, surprised the thousands in the crowd, performing her hit song “We Found Love,” which she released with Harris in 2011.

Rihanna sang from a stage set up in the middle of the crowd, rather than the main stage that Harris was DJing on. After she wrapped singing, she yelled “take it away Calvin” and walked down the stairs of the tall platform so that she could stealthily exit the very crowded audience.

This year’s Coachella marked the second time Rihanna joined Harris to sing “We Found Love,” following her 2012 surprise cameo at the desert festival. That year, Harris performed in the Sahara tent, rather than the large Main Stage where he headlined the 2016 fest. Harris’ set was the only time Rihanna appeared as a performer at Coachella this weekend, though she was spotted at the Neon Carnival party Saturday night where she was photographed with Leonardo DiCaprio.

Big Sean and John Newman also came out to surprise the crowd during Harris’ set. The rapper sang a few songs, including his smash “I Don’t F–k With You” toward the top of the set, while Newman closed the hour with “Blame It On the Night,” on which he collaborated with the DJ. After “Blame It On the Night,” fireworks lit up the sky, before festival-goers were ushered out of the grounds.

Harris’ hourlong show was over 20 minutes delayed, as the DJ showed up on stage much later than his scheduled time of 10:35 p.m. with no explanation. While Harris is a Coachella vet, the sound seemed to be a bit muffled during his set on Sunday and the crowd was fairly low energy.

Harris was at the helm of Sunday night’s lineup of Coachella, becoming the first EDM artist to ever do so. His set was the final performance of the three day fest, closing out weekend one of Coachella. (He’ll be back next weekend to headline Sunday for weekend two, as well.)

Though some rumors swirled beforehand, Harris’ girlfriend Taylor Swift did not appear on stage with her DJ boyfriend — who she publicly spoke out about in a recent Vogue interview — but she was on hand at the festival, posting social media photos in the desert throughout the weekend. After Harris performed, Swift posted a video on Twitter, saying “I’ll never forget this moment. So incredible!” The tweet showed that she was in the crowd, along with a group of friends, including Lorde who surprised at Coachella the night before with Disclosure.