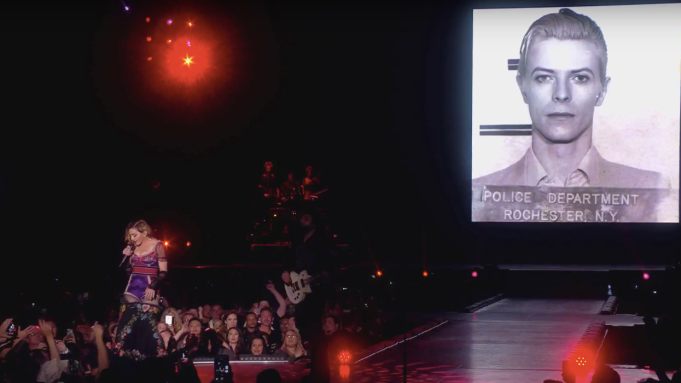 Madonna paid tribute to David Bowie Tuesday night in Houston with a performance of his classic anthem “Rebel Rebel.”

The singer spoke to the people who filled Houston’s Toyota Arena for her Rebel Heart Tour stop about how the late performer had been one of her first inspirations.

“I want to pay tribute to a man who inspired my career,” she said. “If you haven’t heard of David Bowie, look him up, motherf—ers. He was one of the geniuses in the music industry, one of the greatest singer-songwriters of the 20th century and he changed my life when I went to see him in concert in Detroit. He showed me that it was ok to be different. And he’s the first ‘rebel heart’ that I laid eyes on.”

Madonna helped induct Bowie into the Rock and Roll Hall of Fame in 1996.

Madonna is not the only celebrity who has spoken about Bowie’s influence in the wake of his death. Cameron Crowe spoke at TCA about a life-changing interview with Bowie that he conducted while he worked for Rolling Stone. Actress Candy Clark spoke about Bowie after working with him on “The Man Who Fell To Earth.”

Bowie passed away Sunday after an 18-month battle with cancer. He was 69.