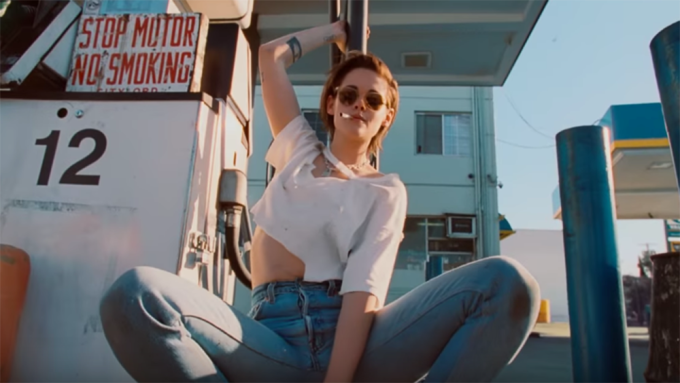 Kristen Stewart stars as a down-and-dirty bad girl in the music video for “Ride ‘Em on Down,” from the Rolling Stones’ album of blues covers “Blue & Lonesome,” released Friday.

“Ride ‘Em on Down” was originally recorded in 1955 by Eddie Taylor, and is the band’s first single off their 25th studio album and first in more than a decade.

Stewart rolls around a post-apocalyptic-looking Downtown Los Angeles in a bright blue Mustang wearing a cropped white t-shirt and high-waisted jeans. She licks a blue lollypop as an homage to the record’s logo, smokes cigarettes at a gas station without any apparent fear of dying in a fiery explosion, avoids a creeper, gapes a burning car, does donuts in the puddly LA River and, to cap it all off, waits patiently for zebra crossing.

Stewart made another memorable music video appearance when she track-suited up for Jenny Lewis’ “Just One of the Guys,” alongside Anne Hathaway and Brie Larson. The actress’ recent film appearances include “Cafe Society,” “Personal Shopper” and “Billy Lynn’s Long Halftime Walk.”

The Stones announced their album in October, saying it was “five decades in the making and [took] just three days to record.” The band’s original members Mick Jagger and Keith Richards, along with Charlie Watts and Ronnie Wood, teamed up with Darryl Jones on bass, and Chuck Leavell and Matt Clifford on keyboard to record the 12-track album at British Grove Studios in West London.