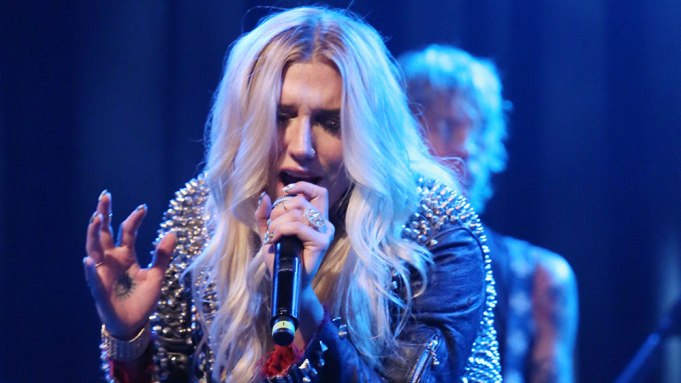 Kesha made a rare surprise appearance at Coachella on Saturday night, giving an emotional performance in the midst of her legal battle with music producer Dr. Luke.

Kesha appeared near the end of EDM producer Zedd’s set at the Outdoor Stage, dressed in all black. Together, Kesha and Zedd performed the title track of Zedd’s 2015 LP, “True Colors.”

The singer did not speak to the crowd directly, but the lyrics of the song seemed to send a clear message that she wouldn’t be backing down against Dr. Luke with Kesha showing off her impressive, raw pipes, as thousands of festival-goers in the crowd were captivated by her powerful vocals.

“I won’t apologize for the fire in my eyes,” she sang. “Let me show you my true colors.”

Rumors had swirled for weeks that Kesha would appear at the surprise-heavy festival, and she fueled speculation with several Instagram posts on Saturday teasing fans.

“Tonight has a magic to it,” read the caption of a photo of her in front of a jet plane. “4 hours and counting. Somewhere over America eek!!!!!,” said another caption.

Kesha claimed that Dr. Luke sexually, physically and mentally abused her during their years working together. In February, she was denied release from a contract that ties her to the producer. Celebrities including Adele and Lady Gaga voiced their support for Kesha after the court ruling, with Taylor Swift donating $250,000 to the singer.

Other surprise performers on Saturday at Coachella included Sam Smith and Lorde with Disclosure on the Main Stage; Ja Rule and Sean Paul with the DJ Matoma at the Sahara Tent; Panic! at the Disco with Halsey at the Outdoor Stage; and N.W.A. members DJ Yella and MC Ren joined Ice Cube during his set on the main stage, which also welcomed Snoop Dogg, Common and “Straight Outta Compton” star O’Shea Jackson. During his set, which opened with “The Walking Dead” inspired graphics and music, Ice Cube talked about the hit movie “Straight Outta Compton,” before introducing his son. Dr. Dre, a founding member of N.W.A., was not present, though Ice Cube did give multiple shoutouts to Eazy-E, saying “Rest In Peace.”