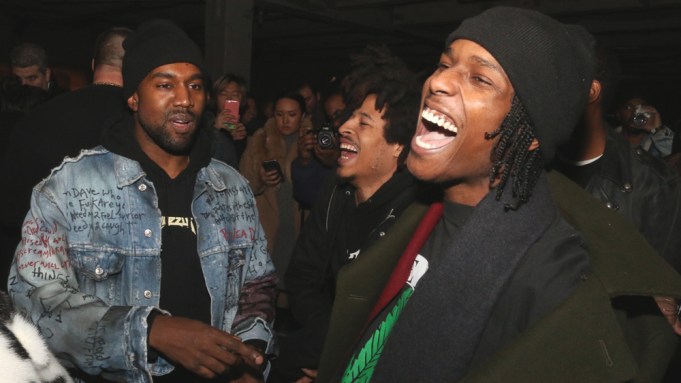 For the second year in a row, Kanye West made a surprise appearance at the Coachella Valley Music and Arts Festival.

A$AP Rocky shared the spotlight with the rapper Friday night at the fest’s Outdoor Theatre, performing West’s song “Father Stretch My Hands Pt. 1” off of his new album “The Life of Pablo.”

Concertgoers went wild as Rocky introduced West as “a f—ing legend.” Unfortunately, the Indio crowd didn’t hear the majority of West’s rhymes as his mic kept cutting in and out before going out entirely.

The chants turned foul when Rocky’s microphone was cut as he tried to rap one more song, past his 7:30 to 8:20 p.m. allotted time slot.

A$AP Rocky had taken the stage about 12 minutes late, blaming the delay on the night’s high winds, which reportedly caused the festival to demand he lower a giant video screen from its designated spot. Throughout the day, festival-goers struggled to get from stage to stage with the strong winds that caused dust to kick up in the desert.

West had a chance to redeem his mic cutting out, as he returned to the same stage later that night with Jack Ü, who followed A$AP Rocky, but West merely stood and clapped while “Power” played during the DJ duo’s set following the introductory guest verse of his single “Send It Up.”

When West stepped onto Jack Ü’s stage, which was adorned with a huge old school-looking computer for the guys to stand atop of, the crowd went wild. But just as the thousands watching the set started to cheer, West left the stage, leaving many to utter: “Is he coming back?” But, he never did.

Justin Bieber, who collaborated with Jack Ü — Diplo and Skrillex — on the hit song “Where Are Ü Now” was rumored to show up to Coachella to make a cameo with the DJs on Friday, but was not in attendance. However, the song was played at the top of the set and then again at the end, closing out the hour — which fooled some of the audience to think that Bieber would show up. (He did not.)

As for other guest cameos on Friday at Coachella, Seal showed up with Gallant during his set that began around 6 p.m.