Continue to Variety SKIP AD
You will be redirected back to your article in seconds
Dec 6, 2016 7:52am PT

Busta Rhymes, the Roots and Joell Ortiz Perform ‘My Shot’ From the ‘Hamilton Mixtape’ on Jimmy Fallon (Watch) 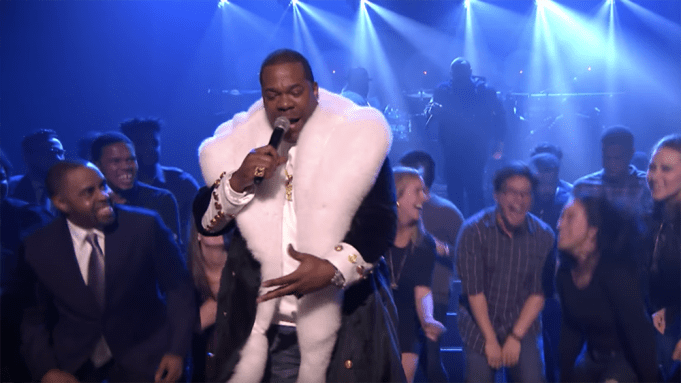 “The Hamilton Mixtape” had its shot on Jimmy Fallon’s “Tonight Show” Monday night.

The Roots, along with Busta Rhymes and Joell Ortiz performed “My Shot,” their track from the recently-released mixtape based on Lin-Manuel Miranda’s hit Broadway musical “Hamilton.”

The performance starts with a group of people in business attire situated around a conference table, but soon opens up. A crowd dances around Busta Rhymes while he raps the Hercules Mulligan verse of the song.

Nate Ruess, who is also listed on the song, was absent. The Roots also appear on two other “Mixtape” tracks — the intro, “No John Trumbull,” and “You’ll Be Back” which features Jimmy Fallon vocals.

Since its release on Dec. 2 the mixtape has not lacked for buzz. It’s also aiming to debut at No. 1 on the Billboard 200 albums chart next week.

Miranda has said that the Broadway show — which earned a record 16 Tony nominations in 2016 and won 11 including the award for best musical — was conceived and started as a mixtape.

What, y'all though we'd leave Schuyler Sisters unremixed? Room Where It Happens? One Last Time?
OF COURSE vol. 2!
(Lemme finish vol 1 tho) https://t.co/OE4soxfPLJ

In a tweet in November, Miranda implied that there is a second volume of songs in the works. “What, y’all though we’d leave Schuyler Sisters unremixed? Room Where It Happens? One Last Time? OF COURSE vol. 2!” he wrote.

But, for now, Busta Rhymes in a very fluffy white coat? That will be enough.