Continue to Variety SKIP AD
You will be redirected back to your article in seconds
Feb 7, 2016 5:44pm PT 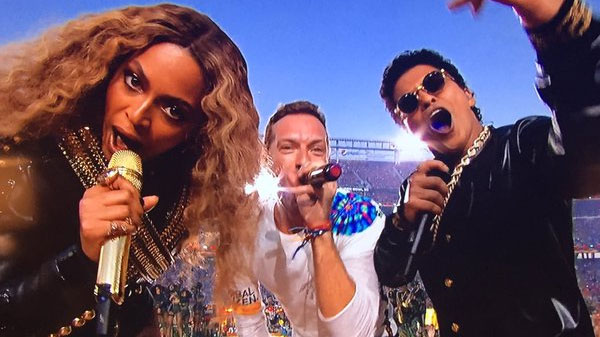 Beyonce performed her new song “Formation” for the first time Sunday on a very big stage — or, field, rather.

The pop star performed the song during the Super Bowl 50 halftime show, joining Coldplay and Bruno Mars, who mixed in bits of his and Mark Ronson’s hit “Uptown Funk.” Eventually, Beyonce, Mars and Coldplay frontman Chris Martin were all singing “Uptown Funk.”

Beyonce’s performance comes one day after she debuted the politically charged music video for the song on Saturday. The video is set in New Orleans and finds Beyonce on top of a sinking New Orleans police cruiser. Other images include a graffiti’d wall that says “Stop shooting us,” and a scene of a black child dancing in front of police officers in riot gear.

Coldplay, the first act that was announced for the Pepsi spectacle, performed a medley of hits, including “Viva La Vida.” At one point, clips of the most iconic Super Bowl musical moments played, showing footage of Michael Jackson, Whitney Houston, U2 and more.

The Pepsi Super Bowl 50 halftime took place at Levi’s Stadium in the San Francisco Bay Area. Watch a video of the performance above.