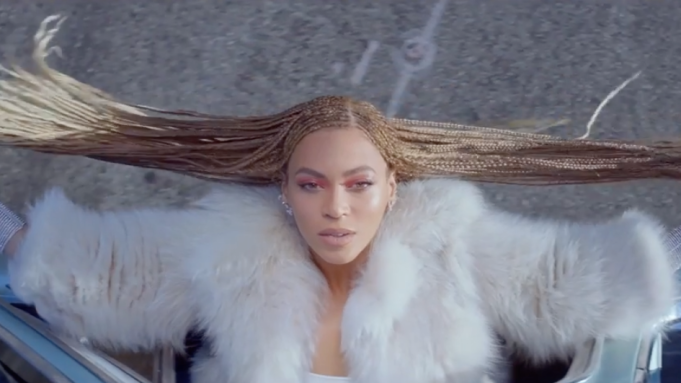 A day ahead of her anticipated return to the Super Bowl halftime show stage, Beyonce has released new single “Formation” along with an accompanying music video.

Set in New Orleans, the clip features shots of Bey lying on top of a sinking New Orleans police cruiser as well as a graffiti’d wall that says, “Stop shooting us.” There’s also a scene of a black child in a hoodie dancing in front of a line of police officers in riot gear. At one point a man holds up a newspaper called “The Truth” with an image of Martin Luther King Jr. on the front page captioned, “More than a dreamer.” Blue Ivy Carter, Beyonce’s daughter, also appears in the video.

“I just might be a black Bill Gates in the making,” Beyonce sings on the track produced by Mike WiLL Made- It.

The song is available for download through streaming service Tidal, which Beyonce co-owns with husband Jay Z and a slew of other big-name artists.

Beyonce will join Coldplay and Bruno Mars in the Super Bowl 50 halftime show on Sunday afternoon on CBS, during which “Formation” will make its live debut, according to Entertainment Tonight. She also headlined the show in 2013. Last week, she and Coldplay released a video for their collaboration “Hymn for the Weekend,” which has since been accused of cultural misappropriation for its portrayal of India.