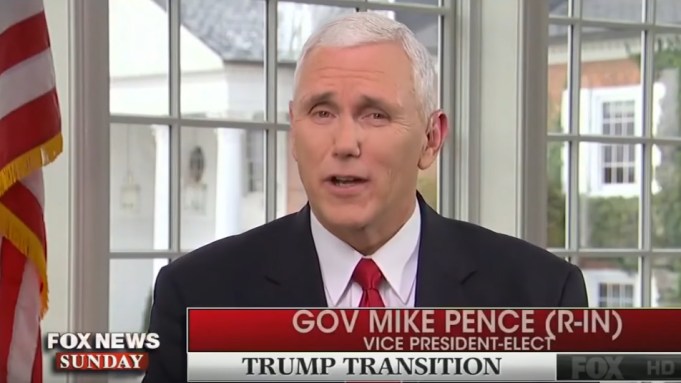 Despite President-elect Donald Trump’s demands that the cast of “Hamilton” apologize to Mike Pence for its statement on Friday, the future vice president took a much more measured approach to the incident on Sunday.

“It was a real joy to be there,” Pence told Chris Wallace in an appearance on “Fox News Sunday.” “When we arrived, we heard a few boos and we heard some cheers and I nudged my kids and reminded them, that’s what freedom sounds like.”

“I did hear what was said from the stage, and I can tell you I wasn’t offended by what was said. I’ll leave to others whether that was the appropriate venue to say it,” he added. He also praised the show as “incredible,” and complimented the “incredibly talented” cast.

On Friday night, actor Brandon V. Dixon, who plays Aaron Burr in the Broadway hit, read a prepared statement to Pence from the cast, with input from the show’s creator, Lin-Manuel Miranda, and producer Jeffrey Seller.

“We, sir, we are the diverse America who are alarmed and anxious that your new administration will not protect us, our planet, our children, our parents, or defend us and uphold our inalienable rights, sir,” Dixon said on stage. “But we truly hope this show has inspired you to uphold our American values and to work on behalf of all of us, all of us. We truly thank you for sharing this show — this wonderful American story told by a diverse group of men, women, of different colors, creeds, and orientations.”

Pence’s response stands in stark contrast to his running mate’s alarmed tweets on the matter. Trump tweeted on Saturday, “Our wonderful future V.P. Mike Pence was harassed last night at the theater by the cast of Hamilton, cameras blazing. This should not happen!”

Trump doubled down on his demand early Sunday, tweeting, “The cast and producers of Hamilton, which I hear is highly overrated, should immediately apologize to Mike Pence for their terrible behavior.”