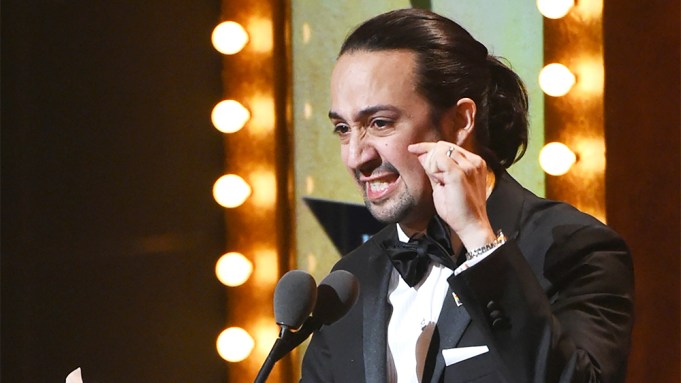 “Hamilton” star Lin-Manuel Miranda paid tribute to the victims of the Orlando shooting Sunday night at the 70th Tony Awards with an emotional speech that brought Broadway to tears.

While accepting the award for best original score, a grateful Miranda, the creator and star of the musical phenom, read a sonnet to the Beacon Theater audience in New York, thanking his wife and cherishing the moment.

“When senseless acts of tragedy reminds us that nothing here is promised. Not one day,” he said in reference to the Orlando massacre.

“This show is proof that history remembers, we live through times when hate and fear seem stronger, we rise and fall and light from dying embers, remembrances that hope and love last longer.”

Earlier in the evening, host James Corden also honored the victims of the gay nightclub shooting in Orlando which killed at least 50 people early Sunday. The 29 year-old gunman, an American citizen, was shot and killed by police.

“Hate will never win,” the “Late Late Show” host said. “Together, we have to make sure of that. Tonight’s show stands as a symbol and celebration of that principle.”

Actor Frank Langella, while accepting his fourth Tony for best actor in “The Father,” also brought up “a dose of true reality–what happened today in Orlando.”

“I urge you Orlando to be strong,” he added. “I’m standing in a room full of the most generous human beings on earth and we will be with you ever step of the way.”