This extravagantly silly ersatz epic has a lunatic conviction you can't help but admire. 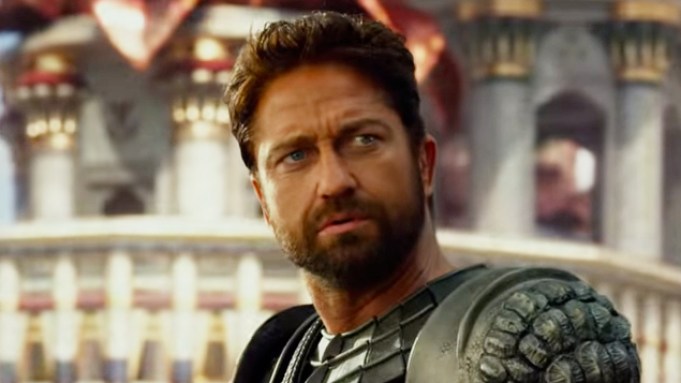 At a certain point in “Gods of Egypt,” an extravagantly silly foray into Afroasiatic mythology from the director Alex Proyas, one wounded deity begs another to show him mercy — a futile request as far as his enemy is concerned, but one that may strike a more receptive chord with the compassionate viewer (which is to say, any viewer who would buy a ticket to “Gods of Egypt”). Since the film enters theaters already in its death throes — undone by toxic word of mouth, much criticism of its predominantly white cast, and an opening-weekend box office projection of about 10% of its $140 million production budget — perhaps a little kindness would not be misplaced. So here goes: This is by any measure a dreadful movie, a chintzy, CG-encrusted eyesore that oozes stupidity and self-indulgence from every pore. Yet damned if Proyas doesn’t put it all out there with a lunatic conviction you can’t help but admire, immediately earning this Lionsgate release a place in the 2016 pantheon of gloriously watchable follies.

With its burnt-yellow cinematography, its excessively gilded production design and its blinding flashes of sunlight, “Gods of Egypt” at times doesn’t suggest a movie so much as a giant cinematic tanning salon — all the better, perhaps, to darken the pearlescent skin tones of most of the actors on display (an effect that can be further enhanced with your purchase of murk-maximizing 3D glasses). The opening scene sweeps us over the streets, roofs and pyramids of ancient Egypt, a prosperous kingdom ruled over by the wise and benevolent Osiris (Bryan Brown). For centuries Osiris has allowed his lowly mortal subjects to dwell in harmony with the gods, who tower over everyone thanks to the latest advances in digital height-modification technology.

Everything changes, however, at the coronation of Osiris’ son, Horus (Nikolaj Coster-Waldau), also known as the Lord of the Air. In storms Osiris’ jealous brother, the desert god Set (Gerard Butler), who promptly murders the king in full view of the horrified public, then defeats his nephew Horus in a duel and gouges out his eyes. It all happens so quickly, and with such dynamic “Virtua Fighter”-style whooshings of the camera, that you barely have time to register such head-scratching details as, say, the fact that Set is way too young to be Osiris’ brother, or the hilariously unexplained provenance of Butler’s Scottish accent. But don’t think too hard about it. It’s magic!

Some time later, Set has established a new reign of terror in which mortals, once free to enter the afterlife, must now buy their way in with treasure. Meanwhile, said mortals have now been sentenced to a lifetime of hard labor, including Bek (Brenton Thwaites), a wily, handsome and quite boring young thief who dreams of freeing Horus from his self-imposed exile. And so, with the help of his fetching lover, Zaya (Courtney Eaton), and under the nose of Set’s right-hand man, Urshu (Rufus Sewell), Bek breaks into the palace’s booby-trapped vault and steals back one of Horus’ eyes. Now sporting a sexy eyepatch, the Lord of the Air determines to seize his revenge against Set and take back the crown.

First, however, Horus must address a few complications, such as the fact that his former squeeze, Hathor (Elodie Yung), is now bedding down with his nemesis; their love nest is strategically positioned next to a towering obelisk that underscores Set’s lust for conquest and his nagging infertility issues. Hathor, incidentally, is described in the production notes as “the goddess of love, music and alcohol,” which means that she presumably would be in a position to do something about Marco Beltrami’s epically tumescent score, or at least to ensure that no one walks into “Gods of Egypt” without a beer in hand. In a movie where the deities transform at will into winged, animal-headed Hasbro figurines, or where Geoffrey Rush’s white-robed sun god Ra reliably bursts into craptacular CG flames, the drinking games pretty much write themselves.

Coming off “I, Robot” and “Knowing,” Proyas hasn’t exactly been in his element for a while, but every so often the elaborate kitsch and clutter of his visual design clears away for the sort of striking effect that reminds you of the impassioned fantasist who gave us “The Crow” and “Dark City” — a small sandstorm that becomes a portal between the lands of the dead and the living, or the enormous proto-Starship Enterprise that Ra navigates through the heavens, every night doing battle with what appears to be a thunder cloud with teeth. At times the camera stays still long enough for you to take in the details of Liz Palmer’s ornately bejeweled costumes, though unfortunately, this also gives you time to study the almost surreal disconnect between foreground and background in every artificial-looking frame.

As ever, Proyas doesn’t skimp on spectacle, though it’s a disappointment when the Sphinx inevitably shows up and disgorges her riddle; you want to tell her to either slow down and enunciate or get the hell back to Vegas. The movie’s action highlight finds two evil goddesses, Astarte (Abbey Lee) and Anat (Yaya Deng), chasing after Horus and Bek on enormous fire-breathing cobras, forcing our mismatched heroes to put their heads together. Coster-Waldau and Thwaites manage a passable, bickersome on-screen chemistry that drives the movie toward its big moral epiphany, which is the importance of treating even one’s so-called inferiors with decency, as Horus slowly learns to see the worth of his mortal subjects and the entwined nature of their destinies.

But really, who is “Gods of Egypt” kidding? Like so many of Hollywood’s sword-and-sandal offerings, this interminable ersatz epic consigns most of the human race to a sea of digital extras while subjecting its immortal characters to more than two hours’ worth of big-screen deification. Butler, looking and sounding so out of place you may wonder if he’s doing early cross-promotion for “Cairo Has Fallen,” nonetheless perfectly embodies the crass, ham-fisted sensibility of the enterprise: He’d be chewing the scenery if you could chew green screen. Not to be outdone in the weird-accent department, Chadwick Boseman glares and snarks up a storm in the role of Thoth, the haughty and imperious god of wisdom. If he knows why this movie exists, he’s not telling.