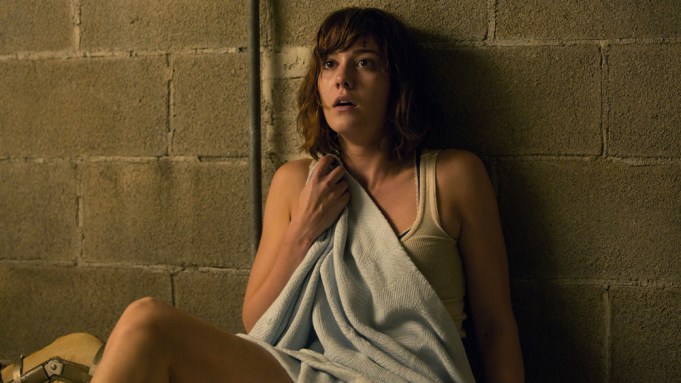 Watching “Cloverfield,” the 2008 found-footage disaster movie about an alien invader on the streets of New York, it was hard to root for human characters who generally seemed bent on taking the stupidest course of action possible, and recording their stupidity for future generations to witness. But boy, do you root for Mary Elizabeth Winstead as the far-from-stupid young woman trapped in an underground bunker in “10 Cloverfield Lane,” a sensationally effective semi-sequel that bears virtually no narrative or stylistic resemblance to its predecessor: The camera holds steady this time, locked in close quarters with a monster who turns out to be all-too-pitiably human (played by a marvelously unnerving John Goodman). Which is not say there are no extraterrestrial terrors lurking in this taut, three-character chamber piece — think “Room” by way of “War of the Worlds” — only that the tension is rooted in psychology rather than gimmickry, and evinces a command of craft that feels old-fashioned in the most refreshing possible sense.

Marking a rock-solid feature debut for director Dan Trachtenberg and screenwriters Josh Campbell and Matthew Stuecken (both credited for the story along with “Whiplash” writer-director Damien Chazelle), “10 Cloverfield Lane” is the rare follow-up that wasn’t even conceived with the first movie in mind. Developed for Paramount’s now-defunct Insurge Pictures genre label under the working titles “The Cellar” and “Valencia,” the film initially told a self-contained story before it was ingeniously reverse-engineered into an offshoot of the “Cloverfield” universe, all done under the sort of secrecy we’ve come to expect from the imprimatur of J.J. Abrams. (He’s credited here as a producer, while three collaborators from the first “Cloverfield” — director Matt Reeves, writer Drew Goddard and producer Bryan Burk — are listed as executive producers.)

It’s a terribly clever marketing move that will likely maximize the commercial intake of a picture that cost less than $10 million to make (and whose conveniently number-forward title will ensure excellent placement in VOD queues). Still, the studio may court some blowback from die-hard fans of the original film (which grossed $170 million worldwide on a $25 million budget), who may well reject Trachtenberg’s movie as a cynical cash grab, or take issue with the fact that it was shot on a tripod. It’d be easy enough to concur, if not for the simple fact that “10 Cloverfield Lane” is vastly smarter and more satisfying than its predecessor; every cynical cash grab should turn out this good.

In an opening sequence that eerily echoes Marion Crane’s flight from justice in “Psycho,” an emotionally distraught Louisiana woman named Michelle (Winstead) packs her bags and drives out into the night. Along the way, she’s hectored by an angry boyfriend on the phone, and also by Bear McCreary’s frenzied score, which rises to a pitch of shrieking intensity shortly before her car skids off the road and flips over. When Michelle regains consciousness, she finds herself in a bunker several feet below ground, where she is fed and tended to by her grizzled, heavy-set man named Howard (Goodman). He urges her not to fight him or try to escape from the bunker, which represents her only hope of survival.

Shortly after the car accident, Howard says, some sort of mass chemical attack took place, killing everyone and rendering the air unbreathable — though not before he managed to rescue Michelle and bring her back to the bunker, along with his genial young neighbor, Emmett (John Gallagher Jr.). Sealed off from the outside world thanks to an airtight door and no cell-phone reception, these three individuals — possibly the last vestiges of humanity — begin the long, uneasy task of sweating out the apocalypse. Certainly there are worse places in which to do it: The well-furnished bunker (outfitted with just the right ratio of cozy to musty by production designer Ramsey Avery) has electricity and running water; the shelves are lined with books, games and movies; and there’s enough food in the pantry to last them until the air clears.

But comforts and utilities only go so far, as Trachtenberg and his cinematographer Jeff Cutter — whose camera navigates the space with effortless ease, even when it has to squeeze inside an air shaft or down a garbage chute — treat their solitary location as both a physical refuge and a psychological trap. The lengthy midsection of “10 Cloverfield Lane” is a work of expertly modulated unease that alternates between claustrophobic suspense and doomsday panic; it’s the rare thriller in which the horror of what might be out there seems less threatening than the possibility that there may be no horror at all. For although there is persuasive, even irrefutable evidence that a cataclysmic attack has indeed taken place, the movie never allows us to forget the possibility that Howard might be a paranoid, delusional psychopath — someone who just happened to have a fully stocked shelter ready to go in case the world decided to end.

That sense of menace stems less from the occasional contortions of the script than from Goodman’s terrifying, richly fleshed-out performance. A brilliant character actor who has been on a hot streak of late — he was a memorable gargoyle in “Inside Llewyn Davis,” and brought his boisterous comic gusto to bear on “Argo,” “The Gambler” and “Trumbo” — Goodman makes Howard a memorably complicated villain. Michelle and Emmett are indebted to the man for his resourcefulness and foresight, and there are moments when Howard drops his guard to reveal a glimpse of a more reasonable, even likable person beneath the clenched, controlling surface.

But those moments don’t last, and even Howard’s hospitality feels conditional, tinged with spite, entitlement and barely suppressed rage. The more Michelle comes to grasp the nature of his particular pathology, the more she comprehends her need to escape, even if it means confronting whatever might be waiting on the other side of the door. Winstead, a seasoned scream queen and one of the most undervalued leading ladies around, emphasizes the character’s quicksilver intelligence and refusal to give up no matter how bad things get (which is often very, very bad), and she gives the second half of “10 Cloverfield Lane” its thrilling momentum as Michelle takes matters into her own hands.

Gallagher, so good opposite Brie Larson in “Short Term 12,” at once varies and complicates the dynamic between the two leads, even if Emmett’s role is necessarily the least developed of the three. Still, the psychological grounding that Trachtenberg achieves here provide more-than-sufficient ballast for the harrowing final moments, which send the movie in an appreciably wilder, more unhinged direction; rarely has “out of the frying pan and into the fire” felt more apt as a description. It would be unfair to say more, or to note exactly how “10 Cloverfield Lane” connects with “Cloverfield” — a question that matters more from a branding perspective, anyway, than a dramatic one. By the end of this tense and unexpectedly human-scaled movie, all that high-concept disaster porn feels like even more of a distant memory.