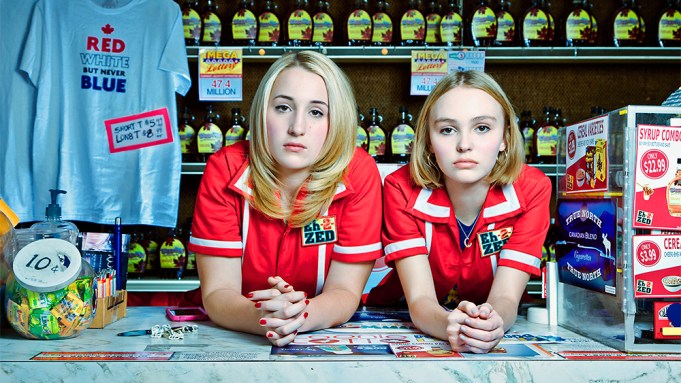 Meet the Colleens (who thoroughly hate their job) in the first clip of Kevin Smith’s new movie “Yoga Hosers,” which stars his daughter and Johnny Depp’s daughter as the two teenagers.

“Yoga Hosers” is Smith’s follow-up to 2014’s “Tusk,” and is loosely related to that movie as the second installment of the director’s “True North” trilogy, though not a direct sequel. The comedy will premiere Sunday night at the Sundance Film Festival, as part of its midnight lineup.

Lily-Rose Depp and Harley Quinn Smith play high school sophomores Colleen Collette and Colleen McKenzie. When they get invited to a senior party, the two accidentally discover an ancient evil buried beneath their Canadian convenience store.

In the clip, the ultra-cool Hunter Calloway, played by “The Shannara Chronicles'” Austin Butler, extends the invite. Tyler Posey of “Teen Wolf” plays his friend, who is apparently “the very definition of suck.”

It was also revealed earlier this week that Smith has a new half-hour comedy project in the works, “Hollyweed.” FremantleMedia North America and StarStream Media are producing the show, directed by and starring Smith.