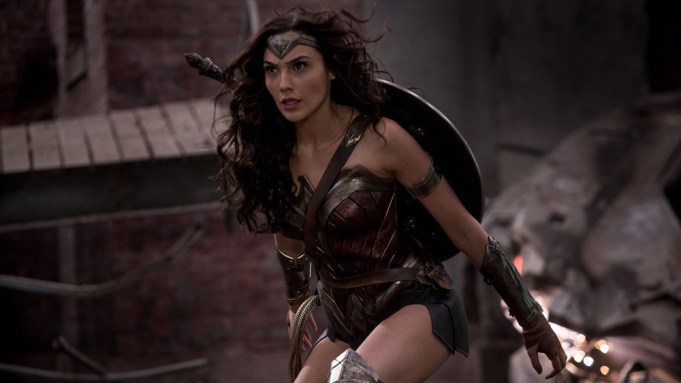 Gal Gadot is “Wonder Woman” in the second trailer for the highly-anticipated film, released by Warner Bros. on Thursday.

“I used to want to save the world — this beautiful place,” the trailer begins with a voiceover from Gadot as she dives off a cliff into a body of water. “But the closer you get, the more you see the great darkness within.”

Her attitude apparently changes upon the arrival of Chris Pine’s character who says he has come to stop “the war.” Which war? “The war to end all wars,” naturally.

The action-packed trailer goes on to show the Amazon princess block bullets with her Bracelets of Submission, smash through a window with her shield and aerial kick a man in slow motion.

Patty Jenkins directs the film from a script written by Allan Heinberg and Geoff Johns. Heinberg and Zack Snyder are credited for the story. In addition to Gadot and Pine, Connie Nielsen, Robin Wright, Lucy Davis and Danny Huston also star.

Gadot spoke to Variety in October as part of the character’s 75th anniversary, and discussed what has become a subject of conversation among those invested in the DC Comics canon: Wonder Woman’s sexuality. “She’s a woman who loves people for who they are,” Gadot said. “She can be bisexual. She loves people for their hearts.”

The first trailer for the film premiered at Comic-Con in July. Gadot’s portrayal of the character first appeared in “Batman v Superman: Dawn of Justice.” In addition to her stand-alone film, she is also set to star in both “Justice League” movies.