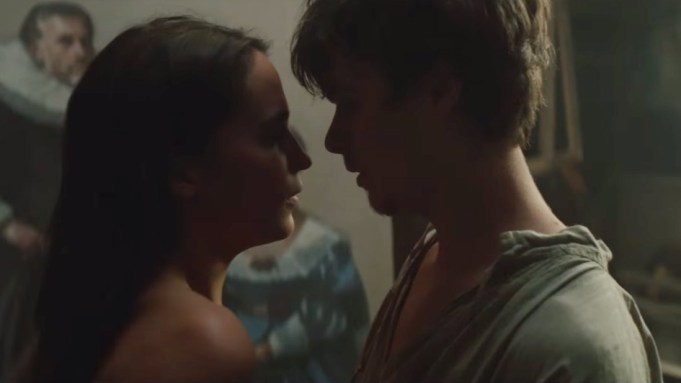 Courtesy of The Weinstein Co.

Set in 17th century Amsterdam, the period drama follows a young artist (DeHaan) who becomes romantically involved with Sophia (Vikander), a married noblewoman, after being commissioned to paint her portrait by her wealthy merchant husband (Waltz). The lovers decide to invest in the high-stakes tulip market in an attempt to raise funds to run away together. Zach Galifianakis, Matthew Morrison, Tom Hollander and Cara Delevingne also star in the drama.

“You would have been an orphan girl on a stormy sea. Marriage is a safe harbor. Love, honor and obey,” Dench’s character Abbess of St. Ursula, a rescuer of orphan children, instructs Sophia in the beginning of the clip.

The intense first-look trailer follows the evolution of an impassioned romance between the painter and Sophia, whose budding relationship eventually draws attention from others in the city, and previews the secret couple’s risky attempts to escape.

Based on a novel by Deborah Moggach, “Tulip Fever,” TWC’s third summer release, is directed by Justin Chadwick from a script by Tom Stoppard.  Alison Owen and Harvey Weinstein are attached to produce.  The drama was initially scheduled to begin filming in 2004 with Keira Knightley and Jude Law as the leads, but production was delayed until the summer of 2014 after government incentives were cut in the UK.