Watch: Shailene Woodley Goes Beyond the Wall in ‘Allegiant’ Trailer 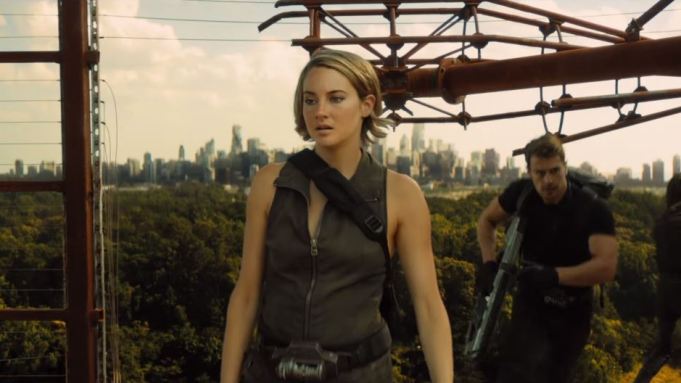 Shailene Woodley and Theo James have gone far beyond Chicago in the new “Tear Down the Wall” trailer for “The Divergent Series: Allegiant,” the third film in the Divergent franchise.

The trailer, revealed on Twitter, shows Woodley and James fearlessly scaling walls, firing weapons and flying through the air as the duo venture outside the walled city of dystopian Chicago for the first time to take on the rulers of their world. Woodley’s Tris character declares, “It’s time to go beyond the wall.”

The trailer portrays Woodley and James’ Four character being faced with uncertainty as to who their allies are in cities in the middle of wastelands. “This is not the place I thought it was,” he asserts.

Lionsgate has split the film adaptation of “Allegiant,” the final novel in Veronica Roth’s Divergent trilogy, into two parts. “Allegiant” opens March 18 and the final film, “Ascendant,” is set for for June, 2017.