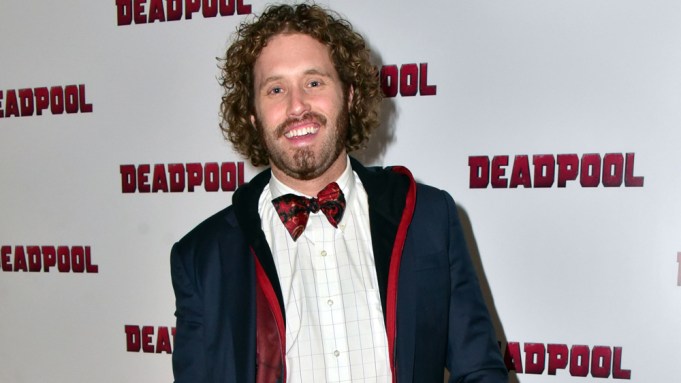 T.J. Miller will lend his voice to “EmojiMovie: Express Yourself” in a leading role, Sony Animation revealed on Sunday.

Miller will play Gene, who was supposed to be a “meh” emoji like his parents. However, the optimistic character has a glitch that causes him to have multiple expressions outside of his control. Of course, he wants to be normal, but will his “glitch” end up being a gift?

The studio also released a video of Miller’s “audition” for the film. The joke clip shows Miller trying to imitate several popular emojis (Kissy face! Fried shrimp!), and Miller comments on how great it is that there’s going to be a live-action emoji movie. He’s informed, however, that it’s actually animated — and he’s been making a number of ridiculous faces for no reason.

Miller is perhaps best known for starring in another tech-related property: HBO comedy “Silicon Valley,” which recently ended its third season and will return for a fourth next year. Miller also appeared in the hit R-rated comic-book movie “Deadpool” earlier this year.

Miller is currently shooting Steven Spielberg’s adaptation of “Ready Player One,” in which he plays online troll i-R0k. His past voice credits include “How to Train Your Dragon,” “Big Hero 6” and “High School USA.”

Anthony Leondis (“Igor”) directs from a script by himself and Eric Siegel (“Men at Work”). “EmojiMovie: Express Yourself” is set to hit theaters in Aug. 11, 2017.