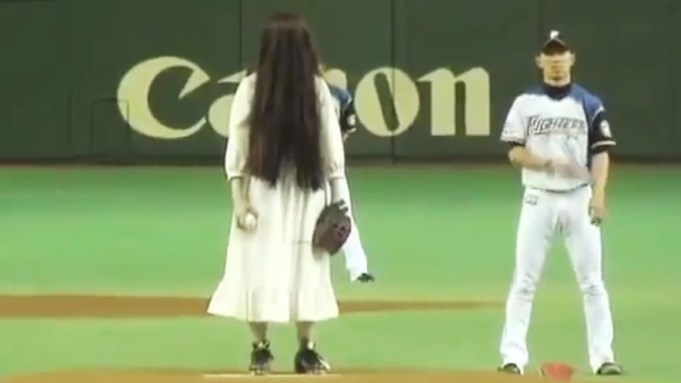 If you were hoping to catch a glimpse of the mashup between Japanese horror movies “The Ring” and “The Grudge,” look no further. The horror stars faced off at the home plate, with Sadako from “The Ring” pitching at “The Grudge’s” Kayako, to promote the upcoming “Sadako vs. Kayako” movie.

The crossover film will hit theaters in Japan in July, but before they face each other on screen they faced each other on the baseball field. Baseball is very popular in Japan, so what better way to promote the iconic horror characters than pitting them against each other on a field?

But that’s not the only treat for viewers. Midway through the cheerleaders’ performance, the jumbotron broke into that classic static that meant Sadako was coming through the screen in “The Ring.” And out walks Sadako onto the field. Her stringy gown is probably not the most comfortable outfit to wind-up and pitch in, but she did have some cleats on.

Kayako had an equally creepy entrance — streaked in blood and followed by little Toshio. Toshio takes a seat by the backstop while Kayako makes her way to home plate, her scratchy guttural sound present as she whips her head back and forth, much like an undead Willow Smith.

Sadako pitches and Kayako hits a 96 km/h ball. Toshio runs toward first base; he’s much more lively than the writhing Kayako, and that concludes the first pitch. After that, the amused Japanese baseball players and creeped-out fans could enjoy the rest of the game.