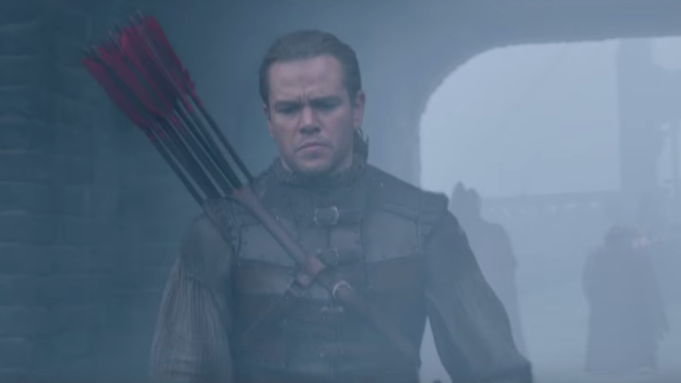 Mysterious monsters threaten the Great Wall of China, and Matt Damon is prepared to defeat them in the first trailer for “The Great Wall.”

“I was born into battle,” Damon growls in a voiceover. “I fought for greed and gods. This is the first war I’ve seen worth fighting for.”

The film, from Legendary and Universal, is set on the Great Wall of China as a group of elite warriors band together to keep out and defeat mythical creatures.

The title cards scroll: “One of mankind’s greatest wonders. 1,700 years to build. 5,500 miles long. What were they trying to keep out?” But the question is not entirely answered in the trailer as we only catch glimpses of the monstrous attackers.

Still, Damon and the other troops leap off the wall and into the mist, prepared to die for their cause.

“The Great Wall,” also stars Pedro Pascal and Willem Dafoe alongside Chinese stars including Andy Lau, Zhang Hanyu and Eddie Peng. It is the first movie to emerge from Legendary Entertainment’s Legendary East operation. It is also the first English-language film for Zhang Yimou, with a budget pegged at $135 million.

The film was originally supposed to hit theaters this year just before Thanksgiving, but was pushed back to Feb. 17, 2017.