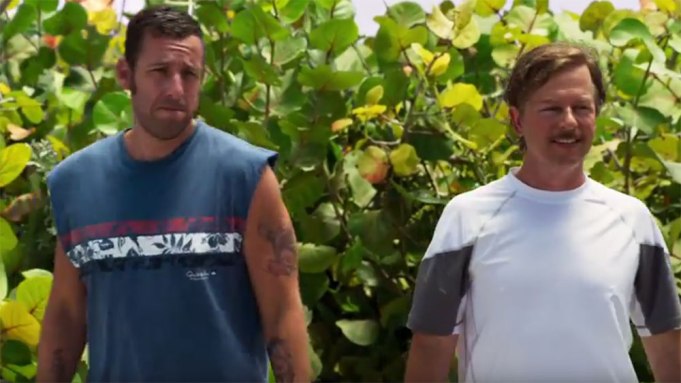 Netflix is promising plenty of low-brow gags in the teaser trailer for “The Do-Over,” courtesy of Adam Sandler and David Spade.

The footage features plenty of gun play, car crashes, jumping off massive cliffs, young women in skimpy bikinis on the beach and repartee between the stars as Sandler and Spade decide to fake their own deaths.

“You sure about this, tough guy?” Sandler asks. “F— yeah,” a typically laid-back Spade replies.

The streaming service is releasing “The Do-Over” on May 27. Sandler and Spade starred in Netflix’s Western spoof “The Ridiculous 6” with Spade portraying General George Custer.

“Netflix got Ridiculous,” the trailer notes. “Now this Memorial Day, the madness continues.”

Besides “The Ridiculous Six,” Sandler and Spade also teamed on “Saturday Night Live” between 1992 and 1995 and on the “Grown-Ups” movies.

The script is by Kevin Barnett and Chris Pappas. “The Do-Over” is a Happy Madison production, with Sandler, Allen Covert and Kevin Grady producing.