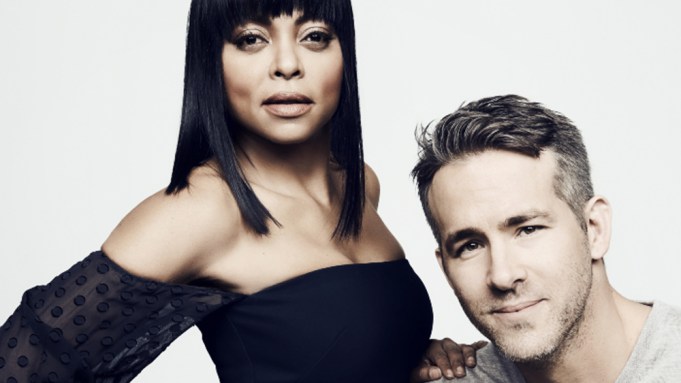 Taraji P. Henson and Ryan Reynolds sat down for a chat for Variety’s “Actors on Actors.” For more, tune in when the fifth season of the series, presented by The Venetian Las Vegas, debuts on PBS SoCal on Jan. 3.

Taraji P. Henson: When did you last audition?

Reynolds: No, my last was … I auditioned and failed for the Coen brothers. “Hail, Caesar!” was it? No, it was the one before that. It wasn’t the right fit, mostly because they’re very high class. They were just quietly shaking their heads, like, “What are you doing here? Do you have a SAG card?”

Henson: I don’t believe that!

Reynolds: When was your last audition?

Henson: I auditioned for Shonda Rhimes for “Scandal.” Thank God Kerry got it. It was  her job.

Reynolds: Isn’t it funny how sometimes you think, “Wow, someone else got it, and they ran with it, and it was perfect for them.”

Henson: Or there are the ones where you’re like, “Pee-yew, glad I didn’t get that one!”

Reynolds: Yes, there are those, too, where you’re like, “I dodged a big ol’ bullet there.”

Henson: What was your worst audition?

Reynolds: I think pretty much most of them. I was never a great auditioner. But I had one where I had to sing, and I’m a nervous singer. I’m one of those people that … you know when you’re in the shower, and you’re like, “This is pretty good”? But once I get out into the real world, it’s just like my voice turns into a hammer that hits everybody in the face. So I did an audition where I had to sing, and it was pretty bad. It’s one of those auditions that was so bad that I look back and I think, “What if that tape surfaces at some point? That’ll be the death of me.” Yeah. That was pretty awful.

Henson: Thank god social media wasn’t popping back in the days when we had to audition. How has social media changed the game for you as your career grew?

Reynolds: I’ve only had it for a year and a half. And I applied it specifically for “Deadpool,” because it was so instrumental for that movie. It was huge for creating a groundswell for “Deadpool,” and so much of the stuff had to do with viral ads. So for me, I can’t speak more highly of any kind of medium other than social media.

Henson: It hasn’t interfered with your personal life? Like, you can go to Target?

Reynolds: I don’t tweet, “Hey this is me walking into the Ralphs.” “Here’s me at my colonoscopy! I’m going to be knocked out in a minute!”

Henson: I’m not like that either — I’ll do a joke, or I’ll do it for promotional stuff. Because you’re walking down the street, and there’s like, “Hey, Cookie!” And maybe I didn’t want the world to see how I look today.

Reynolds: That’s the price of an iconic character that you play.

Henson: See, it was fine until Cookie came. I was OK under the radar. I was good. I could go to Target.

Henson: Never saw that coming. And then I go from this normal life  to … now I have to find  a house on a private, gated road. I love to people-watch. I love to go to the park. But I can’t — everybody’s watching me. I’ve tried wigs, I’ve tried shades. I’ve tried it all.

Reynolds: That’s a good problem to have, when you’ve created a character that has so permeated the zeitgeist and everybody loves them.

Henson: I hope it shifts it. But I have a feeling that the hardcore Cookie fans will be like, “Look at Cookie playing that rocket scientist!”

Reynolds: No way. Have you seen “Hidden Figures”? You could not find two more completely different characters. Did it find you? Did you find it? How did that work?

Henson: Ted Melfi, our director, called my manager, and they sent it to me. I read it and I remember thinking to myself, “How come I haven’t heard of these women?” So I made it my mission to do the film. I didn’t care how much they were paying. I just felt it was an important piece of history that we needed to know about. So then I became very grateful that I was the one chosen to be a part of it. What drew you to “Deadpool”? You put that film together.

Reynolds: Yeah, 11 years I was trying to get that thing going.

Reynolds: No, I represented the death of the superhero for a while. After “Green Lantern,” I was pretty much unhirable. “Deadpool” was one of those things that was just so specific — it was like this weird superhero anarchy that I loved so much. I think I was in the superhero suit more in the marketing materials than I was in the actual film. Which is  why I stole the suit at the end of production and just brought it home with me.