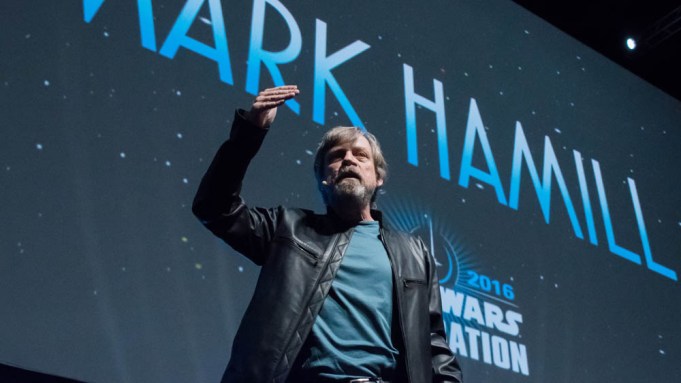 LONDON — Luke Skywalker himself, Mark Hamill, kicked off proceedings at Star Wars Celebration Europe at London’s ExCel Centre on Friday with an admission.

“People say, “Give us a detail about ‘Episode VIII,’ ” he told the packed crowd. “I know you’ll love the irony that I am contractually forbidden to do so.”

When we last saw Luke Skywalker at the end of “The Force Awakens,” he was hiding out in a Jedi Temple on the aquatic planet Ahch-To. Rey (Daisy Ridley) tracks him down and hands him his lightsaber. Then, the movie ends — Hamill doesn’t utter a single word of dialogue in the film. Director J.J. Abrams called the moment “this great long drum roll up to seeing this guy,” but Hamill revealed he was initially skeptical.

“I was nervous,” he continued. “Say I turned and people groaned? But I want to do all movies like that — 30 seconds work and second billing. It’s the most elaborate entrance in show business history. I wasn’t insulted. I thought it was a great surprise.”

Much of the speculation before the release of “The Force Awakens” focused on the absence of Luke from any marketing/promotional material. The secrecy around the film is a real bug-bear for info-starved fans.

“They don’t do it to annoy you,” he said, trying to appease the crowd. “They do it to save the surprises for the screen. The pages get shredded every day. They let me have one scene and I keep it on my person.”

Hamill has worked with directors ranging from Sam Fuller on “The Big Red One” to Matthew Vaughn on “Kingsman: Secret Service,” and gained a cult following with his voice-work as The Joker. About his upcoming version of “Killing Joke,” he said. “It’s not for kids. It’s real mean and nasty.” Still, it is Luke Skywalker that his dominated his 40-year career.

“I got to play a lot of character roles on Broadway and in voice acting,” he countered about being pigeonholed. “If you get in a room with eight voice-over artists, you get a thousand people.”

In a session light on actual reveals but high on warm nostalgia, Hamill shared some new takes on his old cast mates (“I’m glad to talk about Harrison. He was the youngest Beatle”; “I don’t see Carrie for years. She’s like a real sister”) and added a new spin on his favorite stories, finding fun in even the serious moments.

“Even in a scene where Ben Kenobi was struck down, we were laughing,” he added. “It was goofier than hell. There was a guy with an eight-foot dog costume on. I loved swinging across the Death Star chasm with the Princess. They got it in one take. They flew me all around the set like Peter Pan. George was like, ‘If he hits the wall like Wile. E. coyote, the movie is off!”

Now on “Episode VIII,” Rian Johnson represents the fifth director Hamill has worked with in the “Star Wars” film series, following George Lucas, Irvin Kershner, Richard Marquand and Abrams. Of his new collaborator, he says, “I was looping ‘Episode VIII’ yesterday. Rian Johnson is amazing. His dialogue will make you forget ‘May The Force Be With You’.”

Star Wars Celebration Europe is the 11th official fan gathering and the third to be based in Europe.