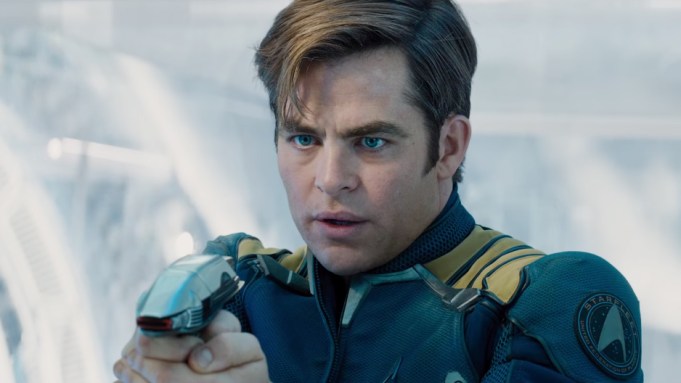 The spot opens with Kirk (Chris Pine) contemplating his position on the Starfleet. “My dad joined Starfleet because he believed in it. I joined on a dare,” he said.

After coming face to face with a formidable foe and the starship in flames, Kirk makes his most riveting declaration.”We were overwhelmed by something. Something we’d never seen before. I know this isn’t the last of my crew. But this is my last report as the captain of the Starship Enterprise.”

The trailer doesn’t feature any new footage, but rather recycles clips from the first two trailers and even brings in some shots from 2009’s “Star Trek.” Rihanna’s “Sledgehammer,” however, sets the tone for some of the action expected in “Beyond.”

“I’m bracing for the pain, and I am letting go,” she sings. “I hit a wall, I thought that I would hurt myself. Oh I was sure, your words would leave me unconscious. And on the floor I’d be lying cold, lifeless. But I hit a wall, I hit ’em all, watch the fall.”

The ballad, written by Sia, offers up a more dramatic tone than the more carefree vibe delivered in the first trailer, which featured “Sabotage” by the Beastie Boys.

“Sledgehammer” will be featured in the film when it releases in theaters July 22.